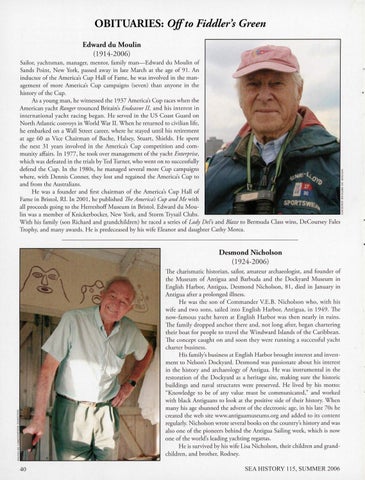 OBITUARIES: Off to Fiddler's Green Edward du Moulin (1 914-2006) Sailor, yach tsman, manager, mentor, fam ily man-Edward du Mo ulin of Sands Point, New York, passed away in late March at the age of 9 1. An inductee of the America's Cup H all of Fame, he was involved in the management of more America's C up campaigns (seven) than anyo ne in the history of the C up. As a yo ung man, he witnessed the 1937 America's C up races when the American yach t Ranger troun ced Britain's Endeavor II, and his interes t in internatio n al yacht racing began . H e served in the US Coast Guard on North Atlantic convoys in Wo rld War II . W hen he returned to civilian life, he embarked on a Wall Street career, where he stayed until his retirement at age 60 as Vice Chairman of Bache, H alsey, Stuart, Shields. He spent the next 3 1 years involved in the America's Cup competition an d community affairs. In 1977, he took over management of the yacht Enterprise, which was defeated in the trials by Ted Turner, who went on to successfully defend the C up . In the 1980s, he managed several more Cup campaigns where, with D ennis Conner, they lost and regained the America's C up to and from the Australians. H e was a founder and first chairman of the America's C up H all of Fame in Bristol, RI . In 2001 , he published The America's Cup and Me with all proceeds going to the H erreshoff Museum in Bristol. Edward du Mo ulin was a member of Knickerbocker, New York, and Storm Trysail Clubs. W ith his family (son Richard and grandchildren) he raced a series of Lady Del's and Blaze to Bermuda Class wins, D eCo ursey Fales Trophy, and many awards. He is predeceased by his wife Eleanor and daughter Cathy Morea.

Desmond Nicholson (1924-2006) The charismatic historian, sailor, amate ur archaeologist, and fo under of the Museum of Antigua and Barbuda and the D ockyard M useum in English H arbor, Antigua, Desmond N icholson, 8 1, died in January in Antigua after a prolonged illness. He was the son of Commander V.E .B. N icholso n wh o, with his wife and two sons, sailed into English H arbor, Antigua, in 1949. The now-famous yacht haven at English H arbor was then nearly in ruins. The family dropped anchor there and, not long after, began chartering their boat for people to travel the W indward Islands of the Caribbean. The concept caught on and soon they were running a successful yacht charter business. H is family's business at English H arbor bro ught interest and inves tment to N elson's D ockyard. D esmond was passionate about his interest in the history and archaeology of An tigua. H e was instrumental in the res toration of the D ockyard as a heritage site, maki ng sure the historic buildings and naval structures were preserved . H e lived by his motto : "Knowledge to be of any value m ust be communicated," and worked with black Antiguans to look at the positive side of their history. When many his age shunned the advent of the electro nic age, in his late 70s he created the web site www.antiguamuseums.org and added to its content regularly. N icholson wrote several books on the country's history and was also one of the pioneers behind the Antigua Sailing week, which is now one of the wo rld's leading yachting regattas. H e is survived by his wife Lisa Nicholson, their children and grandchildren, and brother, Rodney. 40