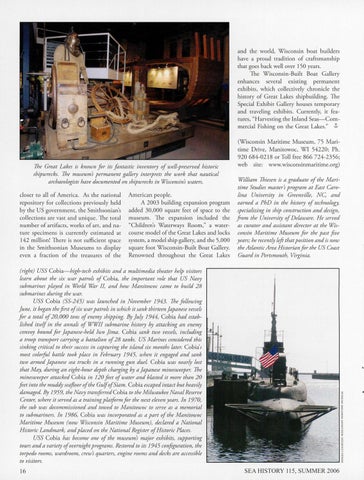 The Great Lakes is known for its fantastic inventory of well-preserved historic shipwrecks. The museum's permanent gallery interprets the work that nautical archaeologists have documented on shipwrecks in Wisconsin's waters.

closer to all of America. As the national repository for collections previously held by the US government, the Smithsonian's collections are vast and unique. The toral number of artifacts, wo rks of art, and nature specimens is currently estimated at 142 million! There is n ot sufficient space in the Smithsonian Museums to display even a fraction of the treas ures of the

American people. A 2003 building expansion program added 30,000 square feet of space to the museum. The expansion included the "Children's Waterways Room,'' a watercourse model of the Great Lakes and locks system, a model ship gallery, and the 5,000 square foot W isconsin-Built Boat Gallery. Renowned throughout the Great Lakes

(Wisconsin Maritime Museum, 75 Maritime Drive, Manitowoc, WI 54220; Ph. 920 684-0218 or Toll free 866 724-2356; web site: www.wisconsinmari time.org) William Thiesen is a graduate of the Ma ritime Studies master's program at East Carolina University in Greenville, NC, and earned a PhD in the history of technology, specializing in ship construction and design, .from the University of Delaware. H e served as curator and assistant director at the Wisconsin Maritime Museum for the past five years; he recently left that position and is now the Atlantic Area H istorian for the US Coast Guard in Portsmouth, Virginia.

(right) USS Cobia-high-tech exhibits and a multimedia theater help visitors learn about the six war patrols of Cobia, the important role that US Navy submarines played in World \Vtir II, and how Manitowoc came to build 28 submarines during the war. USS Cobia (SS-245) was launched in November 1943. The following June, it began the first ofsix war patrols in which it sank thirteen Japanese vessels for a total of 20,000 tons of enemy shipping. By July 1944, Cobia had established itself in the annals of WWII submarine history by attacking an enemy convoy bound for Japanese-held Iwo Jima. Cobia sank two vessels, including a troop transport carrying a battalion of 28 tanks. US Marines considered this sinking critical to their success in capturing the island six months later. Cobia's most colorful battle took place in February 1945, when it engaged and sank two armed Japanese sea trucks in a running gun duel Cobia was nearly lost that May, during an eight-hour depth charging by a Japanese minesweeper. The minesweeper attacked Cobia in 120 feet of water and blasted it more than 20 feet into the muddy seafloor ofthe GulfofSiam. Cobia escaped intact but heavily damaged. By 1959, the Navy transferred Cobia to the Milwaukee Naval Reserve Center, where it served as a training platform for the next eleven years. In 1970, the sub was decommissioned and towed to Manitowoc to serve as a memorial to submariners. In 1986, Cobia was incorporated as a p art of the Manitowoc Maritime Museum (n ow Wisconsin Maritime Museum), declared a National Historic Landmark, and placed on the National Register ofH istoric Places. USS Cobia has become one of the museum's major exhibits, supporting tours and a variety ofovernight programs. Restored to its 1945 configuration, the torpedo rooms, wardroom, crew's quarters, engine rooms and decks are accessible to visitors.