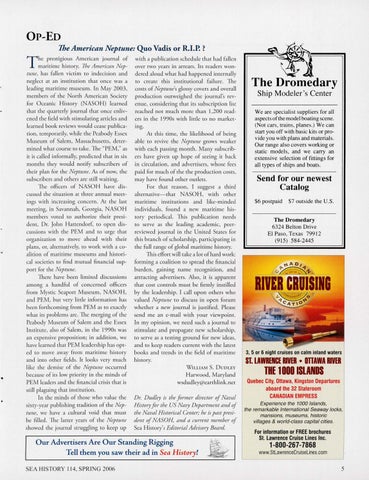 he prestigious American journal of maritime history, The American Neptune, has fallen victim to indecisio n and neglect at an institution that once was a leading maritime museum. In May 2003, members of the No rth American Society for Oceanic History (NASO H ) learned that th e quarterly journal that o nce enli vened the field with stimulating articles and learned book reviews wo uld cease publication, temporarily, while the Peabody Essex Museum of Salem, Massachusetts, determined what co urse to take. The &quot;PEM,&quot; as it is called informally, predicted that in six m onths they would notify subscribers of their plan for the Neptune. As of now, the subscribers and others are still waiting. The officers of NASOH have discussed the situation at three annual meetings with increasing concern. At the last meeting, in Savannah, Georgia, NASOH m embers vo ted to authorize their president, Dr. John Hattendorf, to open discussions with the PEM and to urge that organiza tion to move ahead with their plans, or, alternatively, to work with a coalition of maritime museums and historical societies to find mutual financial support for the Neptune. TI1ere have been limited discussions among a handful of concerned officers from Mystic Seaport Museum, NASO H , and PEM, but very little information has been forthcoming from PEM as to exactly what its problems are. The merging of the Peabody Museum of Salem and rhe Essex Institute, also of Salem, in the 1990s was an expensive propositio n; in addition , we have learned that PEM leadership has opted to move away from m aritime history and into other fi elds. It looks very much like the demise of the Neptune occurred because of its low priori ty in the minds of PEM leaders and the financial crisis that is still plaguing that institution. In the minds of those who val ue rhe sixty-year publishing tradition of the Neptune, we have a cul tural vo id that must be filled. The latter years of the Neptune showed the journal struggling to keep up

with a publi cati o n schedul e rhat had fal len over two years in arrears. Its readers wondered aloud what had hap pened internally to create this institutional failure. The costs of Neptune&#39;s glossy covers and overall production outweighed the journal&#39;s revenue, considering that its subscription list reached no t much m ore than 1,200 readers in the 1990s with little to no marketing. At this time, the likelih ood of being able to revive the Neptune grows weaker with each passing month. Many subscribers have given up hope of seeing it back in circulation , and advertisers, whose fees paid for much of rhe rhe production costs, m ay have found other o utlets. For rhar reason , I suggest a third alternati ve-that NASOH, with other maritime institutions and like- minded individuals, found a new maritime history periodical. This publication needs to serve as the leading academic, peerreviewed journal in the United States for rhis branch of scholars hip, participating in rhe full range of global maritime history. This effort will rake a lot of hard work: forming a coalition to spread rhe fin ancial burden, gaining nam e recognition, and attracting advertisers. Also, it is apparen t that cost controls must be firmly instilled by the leadership. I call upon o thers who valued Neptune to discuss in open forum whether a new journal is justified . Please send m e an e-mail with your viewpoint. In m y opinion, we need such a jo urnal to stim ulate and propaga te new scholarship, to serve as a resting gro und for new ideas, and to keep readers current with the latest books and trends in the field of maritime history. W ILLIAM

D r. Dudley is the former director of Naval H istory for the US Navy D epartment and of the Naval H istorical Center; he is past president of NASOH, and a current member of Sea Histo ry&#39;s Editorial Advisory Board.

Our Advertisers Are Our Standing Rigging Tell them you saw their ad in Sea History! SEA HISTORY 114, SPRING 2006

The Dromedary Ship Modeler&#39;s Center We are speciali st suppliers for all aspects of the model boating scene. (Not cars, trains, planes.) We can start you off with basic kits or provide you with plans and materials. Our range also covers working or static models, and we carry an extensive selection of fittings for all types of ships and boats.