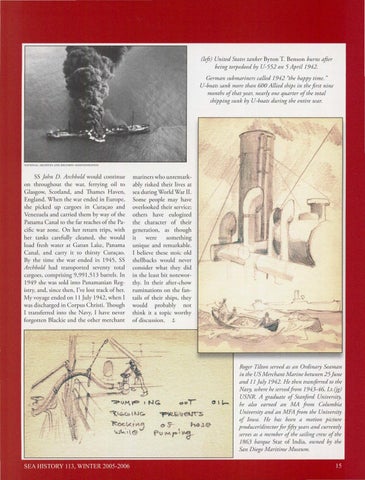 (left) United States tanker Byro n T. Benso n burns after being torpedoed by U-552 on 5 April 1942. German submariners called 1942 "the happy time." U-boats sank more than 600 Allied ships in the first nine months of that year, nearly one quarter of the total shipping sunk by U-boats during the entire war.

SS john D. Archbold would continue on througho ut the war, ferrying oil to G lasgow, Scodand, and Thames Haven, England. When the war ended in Europe, she picked up cargoes in C ura<;:ao and Venezuela and carried them by way of the Panama Canal to the far reaches of the Pacific war zone. On her return trips, with her tanks carefully cleaned, she wo uld load fresh wate r at Gatun Lake, Panama Canal, and carry it ro thirsty C ura<;:ao. By the time the war ended in 1945, SS Archbold had transported seventy total cargoes, comprising 9 ,99 1,513 barrels. In 1949 she was sold into Panamanian Registry, and, since then, I've lost track of her. My voyage ended on 11July 1942, when I was discharged in Corpus C hristi. Th ough I transferred into the Navy, I have never forgotten Blacki e and the other merchant

mariners who unremarkably risked their lives at sea during World War II. Some people may have overlooked their service; others have eulogized the character of their generation, as though it were som ething unique and remarkable. I believe these stoic old shellbacks would never co nsider what they did in the least bit noteworthy. In their after-chow ruminations on the fantails of thei r ships, they wo uld probably not think it a topic worthy of discussio n. J,

Roger Tilton served as an Ordinary Seaman in the US Merchant Marine between 25 June and 11July1942. He then transferred to the Navy, where he servedfrom 1943-46, Lt. (jg) USNR. A graduate of Stanford University, he also earned an MA from Columbia University and an MFA from the University of Iowa. He has been a motion picture producer/director for fifty years and currently serves as a member of the sailing crew of the 1863 barque Sta r of India, owned by the San Diego Maritime Museum.