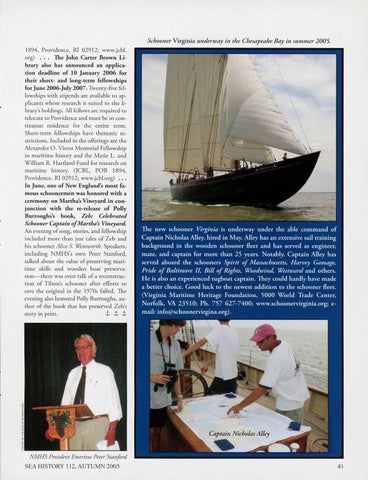 Schooner Virginia underway in the Chesapeake Bay in summer 2005. 1894, Providence, RI 02912; www.j cbl. org) . . â&amp;#x20AC;˘ The John Carter Brown Library also has announced an application deadline of 10 January 2006 for their short- and long-term fellowships for June 2006-July 2007. Twen ty-five fellowships with stipends are available to applicants whose research is suited to the library&#39;s holdings. All fellows are required ro relocate to Providence and must be in continuous residence for the entire term. Short-term fellowships have thematic restrictions. Included in the offerings are the Alexander 0. Vietor Memorial Fellowship in maritime history and the Marie L. and William R. Hartland Fund for research on maritime history. QCBL, POB 1894, Providence, RI 02912; www.jcbl.org) ... In June, one of New England&#39;s most famous schoonermen was honored with a ceremony on Martha&#39;s Vineyard in conjunction with the re-release of Polly Burroughs&#39;s book, Zeb: Celebrated

Schooner Captain ofMartha&#39;s Vineyard. An evening of song, stories, and fellowship included more than just tales of Zeb and his schooner Alice S. Wentworth. Speakers, including NMHS&#39;s own Peter Stanford, talked about the value of preserving maritime skills and wooden boat preservation-there was even talk of a reconstruction of T ilto n&#39;s schooner after efforts to save the original in the 1970s failed. The evening also honored Polly Burroughs, author of the book that has preserved Zeb&#39;s story in print. ~ ~ ~