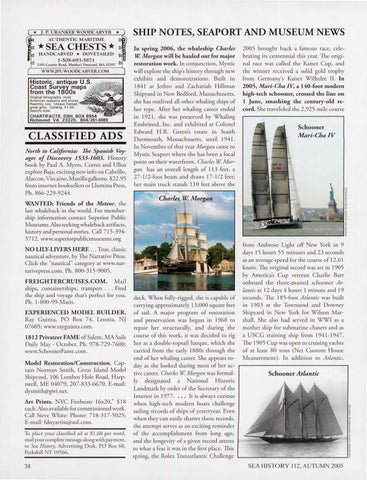 In spring 2006, the whaleship Charles W. Morgan will be hauled out for major restoration work. In conjunction, Mystic will explore the ship&#39;s history through new exhibits and demonstrations. Built in 1841 at Jethro and Zachariah Hillman Shipyard in New Bedford, Massachusetts, she has outlived all other whaling ships of her type. After her whaling career ended in 1921 , she was preserved by Whaling Enshrined, Inc. and exhibited at Colonel Edward H.R. Green&#39;s estate in South Dartmouth , Massachusetts, umil 1941. In November of that year Morgan came to Mystic Seaport where she has been a focal poim on their waterfront. Charles W Morgan has an overall length of 113 feet, a 27-112-foot beam and draws 17-1/2 feet; her main truck stands 110 feet above the

2005 brought back a famous race, celebrating its centennial this year. 1he original race was called the Kaiser Cup, and the winner received a solid gold trophy from Germany&#39;s Kaiser Wilhelm II. In 2005, Mari-Cha Iv; a 140-foot modern high-tech schooner, crossed the line on 1 June, smashing the century-old record. She rraveleled the 2,925-mile course

deck. When fully-rigged, she is capable of carrying approximately 13,000 square feet of sail. A major program of restoration and preservation was begun in 1968 to repair her structurally, and during the course of this work, it was decided to rig her as a double-topsail barque, which she carried from the early 1880s through the end of her whaling career. She appears today as she looked during most of her active career. Charles W Morgan was formally designated a National Historic Landmark by order of the Secretary of the Interior in 1977. . . . Ir is always curious when high-tech modern boars challenge sailing records of ships of yes teryear. Even when they can easily shatter those records, the attempt serves as an exciting reminder of the accomplishment from long ago, and the longevity of a given record attests to what a fear it was in the first place. This spring, rhe Rolex Transadamic Challenge

from Ambrose Light off New York in 9 days 15 hours 5 5 minutes and 23 seconds at an average speed for the course of 12.61 knots. The original record was set in 1905 by America&#39;s Cup veteran Charlie Barr onboard rhe three-masted schooner Atlantic at 12 days 4 hours 1 minute and 19 seconds. The 185-foor Atlantic was built in 1903 at the Townsend and Downey Shipyard in New York for Wilson Marshall. She also had served in WWI as a mother ship for submarine chasers and as a USCG training ship from 1941-1947. The 1905 Cup was open to cruising yachts of at least 80 tons (Net Custom House Measurement). In addition to Atlantic,