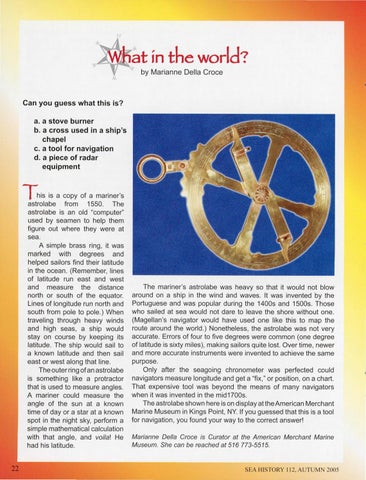 at in the world? by Marianne Della Croce

Can you guess what this is? a. a stove burner b. a cross used in a ship&#39;s chapel c. a tool for navigation d. a piece of radar equipment

his is a copy of a mariner&#39;s astrolabe from 1550. The astrolabe is an old &quot;computer&quot; used by seamen to help them figure out where they were at sea. A simple brass ring , it was marked with degrees and helped sailors find their latitude in the ocean. (Remember, lines of latitude run east and west and measure the distance north or south of the equator. Lines of longitude run north and south from pole to pole.) When traveling through heavy winds and high seas, a ship would stay on course by keeping its latitude. The ship would sail to a known latitude and then sail east or west along that line. The outer ring of an astrolabe is something like a protractor that is used to measure angles. A mariner could measure the angle of the sun at a known time of day or a star at a known spot in the night sky, perform a simple mathematical calculation with that angle, and voila! He had his latitude.

The mariner&#39;s astrolabe was heavy so that it would not blow around on a ship in the wind and waves. It was invented by the Portuguese and was popular during the 1400s and 1500s. Those who sailed at sea would not dare to leave the shore without one. (Magellan &#39;s navigator would have used one like this to map the route around the world .) Nonetheless, the astrolabe was not very accurate. Errors of four to five degrees were common (one degree of latitude is sixty miles), making sailors quite lost. Over time , newer and more accurate instruments were invented to achieve the same purpose. Only after the seagoing chronometer was perfected could navigators measure longitude and get a &quot;fix,&quot; or position , on a chart. That expensive tool was beyond the means of many navigators when it was invented in the mid 1700s. The astrolabe shown here is on display at the American Merchant Marine Museum in Kings Point, NY. If you guessed that this is a tool for navigation , you found your way to the correct answer! Marianne Della Croce is Curator at the American Merchant Marine Museum. She can be reached at 516 773-5515.