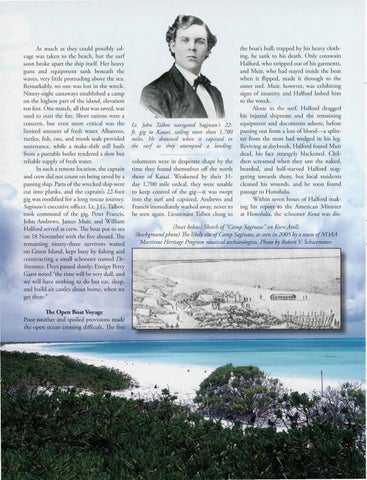 As much as they could possibly salvage was taken to the beach, bur the surf soon broke apart the ship itself. Her heavy guns and equipment sank beneath the waves, very little protruding above the sea. Remarkably, no one was lost in the wreck. Ninety-eight castaways established a camp on the highest part of the island, elevation ten feet. One march, all that was saved, was used to start the fire. Shorr rations were a concern, bur even more critical was the limited amo unt of fresh water. Albatross, turtles, fish, rats, and monk seals provided sustenance, while a make-shift still built from a portable boiler rendered a slow bur reliable supply of fresh water. In such a remote location, the captain and crew did nor count on being saved by a passing ship. Parts of the w recked ship were cur into planks, and the captain&#39;s 22-foor gig was modified for a long rescue journey. Saginaw&#39;s executive officer, Lr. J G. Talbot, rook command of the gig. Peter Francis, John Andrews, James Muir, and William Halford served as crew. The boat put to sea on 18 November with the five aboard. The remaining ninety-three survivors waited on Green Island, kept busy by fishing and constructing a small schooner named Deliverance. D ays passed slowly; Ensign Perry Garst noted &quot;the rime will be very dull, and we will have nothing to do bur eat, sleep, and build air castles about home, when we get there.&quot; The Open Boat Voyage Poor weather and spoiled provisions made the open ocean crossing difficult. The five

ft. gig to Kauai, sailing more than 1,700 miles. He drowned when it capsized in the surf as they attempted a landing. volunteers were in desperate shape by the rime they found themselves off the north shore of Kauai. Weakened by their 3 1day 1,700 mile ordeal, they were unable to keep control of the gig-it was swept into the surf and capsized. Andrews and Francis immediately washed away, never to be seen again. Lieutenant Talbot clung to

rhe boar&#39;s hull; trapped by his heavy clothing, he sank to his death. Only coxswain Halford, who stripped our of his garments, and Muir, who had stayed inside the boar when it flipped, made it through to the outer reef. Muir, however, was exhibiting signs of insanity, and Halford lashed him to the wreck. Alone in rhe su rf, Halford dragged his injured shipmate and the remaining equipment and documents ashore, before passing our from a loss of blood-a splinter from the mast had wedged in his leg. Reviving at daybreak, Halford found Muir dead, his face strangely blackened. C hildren screamed when they saw the naked, bearded, and half-starved Halford staggering towards them, bur local residents cleaned his wounds, and he soon found passage to Honolulu. Within seven hours of Halford making his report to the American Minister at Honolulu, the schoo ner Kona was dis-