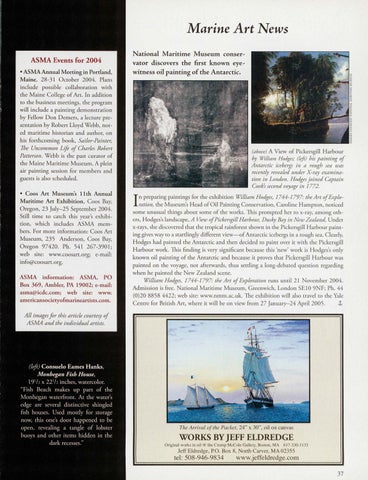 (above) A View of Pickersgill Harbour by William Hodges; (left) his painting of

n preparing paintin~s for the ex~ibir~o~ William Ho~ges, 1744- ~ 797: the Art ofEx!loration, rhe Museums Head of01l Pamtmg Conservation, Caroline Hampton, noticed some unusual things about some of rhe works. This prompted her to x-ray, among others, Hodges&#39;s landscape, A View ofPickersgill Harbour, Dusky Bay in New Zealand. Under x-rays, she discovered rhar rhe tropical rainforest shown in the Pickersgill Harbour painting gives way to a startlingly different view-of Antarctic icebergs in a rough sea. C learly, Hodges had painted the Antarctic and then decided to paint over it with the Pickersgill Harbour work. This finding is very significant because this &#39;new&#39; work is Hodges&#39;s only known oil painting of the Antarctic and because it proves that Pickersgill Harbour was painted on the voyage, not afterwards, thus settling a long-debated question regarding when he painted the New Zealand scene. William Hodges, 1744-1797: the Art of Exploration runs until 21 November 2004. Admission is free. National Maritime Museum, Greenwich, London SElO 9NF; Ph. 44 (0)20 8858 4422; web site: www.nmm.ac.uk. The exhibition will also travel to the Yale Centre for British Arr, where it will be on view from 27 January-24 April 2005. J,

All images for this article courtesy of ASMA and the individual artists.