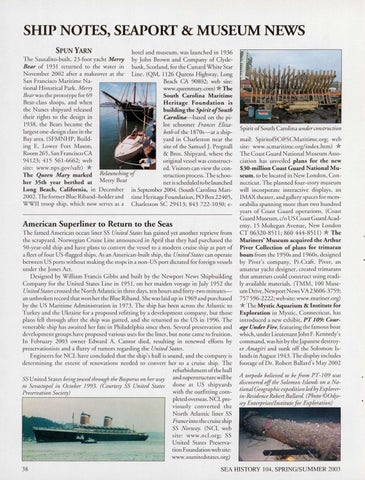 American Superliner to Return to the Seas The famed American ocean liner SS United States has gained yet another reprieve from the scrapyard. Norwegian Cruise Line announced in April that they had purchased the 50-year-old ship and have plans to convert the vessel to a modern cruise ship as part of a fleet of four US-flagged ships. As an American-built ship, the United States can operate between US ports without making the stops in a non-US port dictated for foreign vessels under the Jones Act. Designed by William Francis G ibbs and built by the Newport News Shipbuilding Company for the United States Line in 1951, on her maiden voyage in July 1952 the United States crossed theNonhAtlantic in three days, ten hours and forty-twominutesan unbroken record that won her the Blue Riband. She was laid up in 1969 and purchased by the US Maritime Admin istration in 1973. The ship has been across the Atlantic to Turkey and the Ukraine for a proposed refitting by a development company, but those plans fell through after the ship was gutted, and she returned to the US in 1996. The venerable ship has awaited her fate in Philadelphia since then. Several preservation and development groups have proposed various uses for the liner, but none came to fruition. In February 2003 owner Edward A. Cantor died, resulting in renewed efforts by preservationists and a flurry of rumors regarding the United States. Engineers for NCL have concluded that the ship&#39;s hull is sound, and the company is determining the extent of renovations needed to convert her to a cruise ship. The refurbishment of the hull SS United S rares being towed through the Bosporus on her way and superstructure will be to Sevastopol in October 1993. (Courtesy SS United States done at US shipyards with the outfitting comPreservation Society) pleted overseas. NCL previo usly converted the North Atlantic liner SS France into the cruise ship SS Norway. (NCL web site: www .ncl.org; SS United States Preservation Foundation web si te: www.ssunitedstates.org) 38