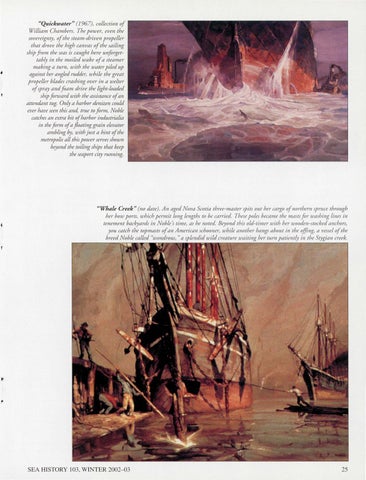 "Quickwater" (1967), collection of William Chambers. The power, even the sovereignty, ofthe steam-driven propeller that drove the high canvas ofthe sailing ship from the seas is caught here unforgettably in the moiled wake ofa steamer making a turn, with the water piled up against her angled rudder, while the great propeller blades crashing over in a welter ofspray and foam drive the light-loaded ship forward with the assistance ofan attendant tug. Only a harbor denizen could ever have seen this and, true to form, Noble catches an extra bit ofharbor industrialia in the form ofa floating grain elevator ambling by, with just a hint ofthe metropolis all this power seroes shown beyond the toiling ships that keep the seaport city running.

"Whale Creek" (no date). An aged Nova Scotia three-master spits out her cargo of northern spruce through her bow ports, which permit long lengths to be carried. These poles became the masts for washing lines in tenement bacleyards in Noble's time, as he noted. Beyond this old-timer with her wooden-stocked anchors, y ou catch the topmasts ofan American schooner, while another hangs about in the offing, a vessel ofthe breed Noble called "wondrous, "a splendid wild creature waiting her turn patiently in the Stygian creek. """''""""'~~~~,,....,..'"""':-r'