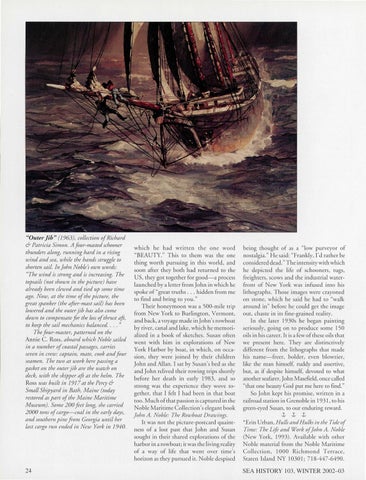 & Patricia Simon. A four-masted schooner thunders along, running hard in a rising wind and sea, while the hands struggle to shorten sail. In john Noble 's own words: "The wind is strong and is increasing. The topsails (not shown in the picture) have already been clewed and tied up some time ago. Now, at the time of the picture, the great spanker (the after-mast sail) has been lowered and the outer j ib has also come down to comp ensate for the loss ofthrust aft, to keep the sail mechanics balanced. ... " The four-master, patterned on the Annie C. Ross, aboard which Noble sailed in a number ofcoastal passages, carries seven in crew: captain, mate, cook and four seamen. The two at work here passing a gasket on the outer jib are the watch on deck, with the skipper aft at the helm. The Ross was built in 1917 at the Percy & Small Shipyard in Bath, M aine (today restored as part ofthe Maine Maritime Museum). Some 2 00 feet long, she carried 2 000 tons of cargo-coal in the early days, and southern pine .from Georgia until her last cargo run ended in New York in 194 0.

which h e h ad w ricren rhe o ne wo rd "BEAUTY. " T his to rhem was the o ne thing worth pursuing in this wo rld, and soon after they bo th had returned to the US, they got toge ther fo r good-a process launched by a lette r fro m John in which he spoke of "grear rrurhs . . . hidden fro m me to find and bring to yo u." Their honeymoon was a 500-mile trip from New York to Burlington , Vermo nt, and back, a voyage m ade in Jo hn's rowboat by river, canal and lake, which he m em o rialized in a book of skerches. Susan often we nr with him in explo rario ns of New Yo rk Harbor by boar, in which , o n occasion, they we re joined by th eir children John and Allan . I sat by Susan's bed as she and John reli ved their rowing rri ps sho rdy befo re her dea th in early 1983, and so strong was rhe experi ence th ey wove together, that I felt I had been in thar boar too. M uch of that passion is captured in the No bl e M ari rime Co llecri o n's eleganr book j ohn A. N oble: The Rowboat Drawings. Ir was nor the pi crure-pos rcard quainrness of a lost pas t thar Jo hn and Susan soughr in rheir shared explo rarions of rhe harbor in a rowboar; ir was rhe living realiry of a way of li fe rhar we nr over rime's ho rizon as rhey pursued ir. Noble despised