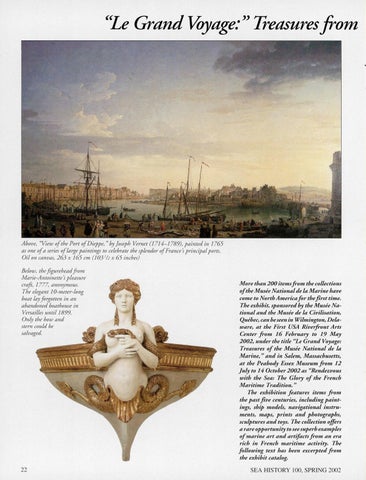 Above, "View ofthe Port ofDieppe, " by J oseph Vernet (1714-1789), painted in 1765 as one ofa series of large paintings to celebrate the splendor of France 5principal ports. Oil on canvas, 2 63 x 165 cm (1 03'12 x 65 inches) Below, the figurehead from Marie-Antoinette pleasure craft, 1777, anonymous. The elegant 10-meter-long boat lay forgotten in an abandoned boathouse in Versailles until 1899. Only the bow and stern could be salvaged.

More than 200 items from the collections ofthe Musee National de la Marine have come to North America for the first time. The exhibit, sponsored by the Musee National and the Musee de la Civilisation, Quebec, can be seen in Wilmington, Delaware, at the First USA Riverfront Arts Center from 16 February to 19 May 2002, under the title "Le Grand Voyage: Treasures of the Musee National de la Marine, " and in Salem, Massachusetts, at the Peabody Essex Museum from 12 July to 14 October 2002 as "Rendezvous with the Sea: The Glory of the French Maritime Tradition. " The exhibition features items from the past five centuries, including paintings, ship models, navigational instruments, maps, prints and photographs, sculptures and toys. The collection offers a rare opportunity to see superb examples of marine art and artifacts from an era rich in French maritime activity. The following text has been excerpted from the exhibit catalog.