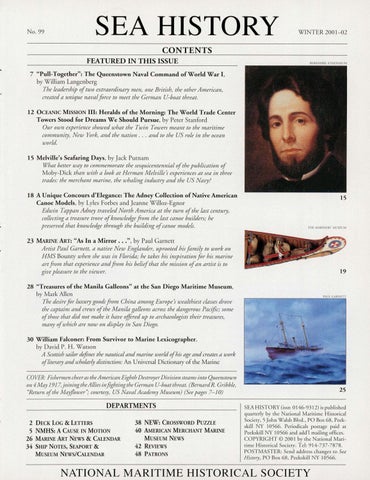 CONTENTS FEATURED IN THIS ISSUE

7 &quot;Pull-Together&quot;: The Queenstown Naval Command ofWorld War I, by W illiam Langen berg The leadership oftwo extraordinary men, one B ritish, the other American, created a unique naval force to meet the German U-boat threat. 12 O CEANIC MISSION III: Heralds of the Morning: The World Trade Center Towers Stood for Dreams We Should Pursue, by Peter Stanford Our own experience showed what the Twin Towers meant to the maritime community, New York, and the nation ... and to the US role in the ocean world. 15 Melville&#39;s Seafaring Days, by Jack Putnam What better way to commemorate the sesquicentennial ofthe publication of Moby-Dick than with a look at H erman Melville&#39;s experiences at sea in three trades: the merchant marine, the whaling industry and the US Navy? 18 A Unique Concours d&#39;Elegance: The Adney Collection of Native American Canoe Models, by Lyles Forbes and Jeanne Willoz-Egnor Edwin Tappan Adney traveled North America at the turn of the last century, collecting a treasure trove of knowledge from the last canoe builders; he preserved that knowledge through the building ofcanoe models.

23 MARINE ART: &quot;As In a Mirror ... &quot; , by Paul Garnett Artist Paul Garnett, a native New Englander, uprooted his family to work on HMS Bounty when she was in Florida; he takes his inspiration for his marine art from that experience and from his beliefthat the mission ofan artist is to give pleasure to the viewer. 28 &quot;Treasures of the Manila Galleons&quot; at the San Diego Maritime Museum, by Mark Allen The desire for luxury goods from China among Europe&#39;s wealthiest classes drove the captains and crews ofthe Manila galleons across the dangerous Pacific; some ofthose that did not make it have offered up to archaeologists their treasures, many of which are now on display in San D iego.

A CAUSE IN MOTION