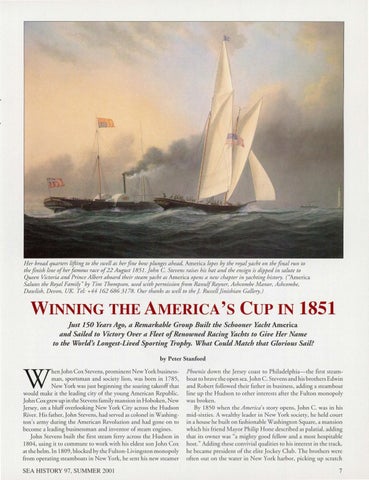 Her broad quarters lifting to the swell as her fine bow plunges ahead, America lopes by the royal yacht on the final run to the finish line ofher famous race of22 August 1851. John C. Stevens raises his hat and the ensign is dipped in salute to Queen Victoria and Prince Albert aboard their steam yacht as America opens a new chapter in yachting history. (&#39;&#39;America Salutes the Royal Family&quot; by Tim Thompson, used with permission from RanulfRayner, Ashcombe Manor, Ashcombe, Dawlish, Devon, UK Tel: +44 162 686 3178. Our thanks as well to the J Russell jinishian Gallery.)

WINNING THE AMERICA&#39;S CUP IN

Just 150 Years Ago, a Remarkable Group Built the Schooner Yacht America and Sailed to Victory Over a Fleet ofRenowned Racing Yachts to Give Her Name to the World&#39;s Longest-Lived Sporting Trophy. What Could Match that Glorious Sail? by Peter Stanford

hen John Cox Stevens, prominent New York businessman, sportsman and society li on, was born in 1785, New York was just beginning the soaring takeoff that would make it the leading city of the yo ung American Republic. John Cox grew up in the Stevens family mansion in Hoboken, New Jersey, on a bluff overlooking New York C ity across the Hudson River. His father, John Stevens, had served as colonel in Washington&#39;s army during the American Revolution and had gone on to become a leading businessman and inventor of steam engines. John Stevens built the first steam ferry across the Hudso n in 1804, using it to commute to work with his eldest son John Cox at the helm. In 1809, blocked by the Fulton-Livingston monopoly from operating steamboats in New York, he sent his new steamer

Phoenix down rhe Jersey coast to Philadelphia-the first steamboat to brave the open sea. John C. Stevens and his brothers Edwin and Robert followed their father in business, adding a steamboat line up the Hudson to other interests afrer the Fulton monopoly was broken . By 1850 when the America&#39;s story opens, John C. was in his mid-sixties. A wealthy leader in New York society, h e held court in a house he built on fashionable Washington Square, a mansion which his friend Mayor Philip Hone described as palatial, adding rhar irs owner was &quot;a migh ty good fellow and a most hospitable host.&quot; Adding these convivial qualities to his interest in rhe track, he became president of the elite Jockey C lub. The brothers were ofren our o n the water in New York harbor, picking up scratch 7