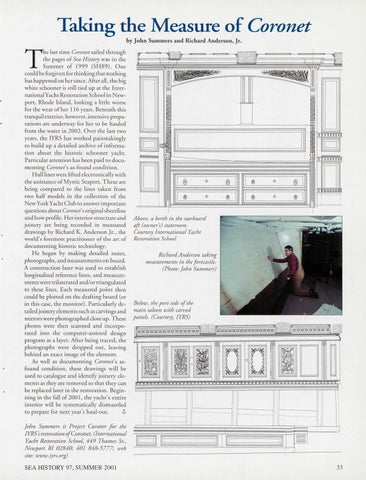 Taking the Measure of Coronet by John Summers and Richard Anderson, Jr.

he last time Coronet sailed through the pages of Sea History was in the Summer of 1999 (SH89) . One could be forgiven for thinking that nothing has happened on her since. After all, the big white schooner is still tied up at the International Yacht Restoration School in Newport, Rhode Island, looking a little worse for the wear of her 116 years. Beneath this tranquil exterior, however, intensive preparations are underway for her to be hauled from the water in 2002. Over the last two years, the IYRS has worked painstakingly to build up a detailed archive of information about the historic schooner yacht. Particular attention has been paid to documenting Coronet's as-found condition. Hull lines were lifted electronically with the assistance of Mystic Seaport. These are being compared to the lines taken from two half models in the collection of the New York Yacht Club to answer important questions abo ut Coronet's original sheerline and bow profile. Her interior structure and joinery are being recorded in measured drawings by Richard K. Anderson Jr., the world's foremost practitioner of the arc of documenting historic technology. He began by making detailed notes, photographs, and measurements on board. A construction laser was used to establish longitudinal reference lines, and measurements were rrilaterated and/ or triangulated to these lines. Each measured point then could be plotted on the drafting board (or in this case, the monitor) . Particularly detailed joinery elements such as carvings and mirrors were photographed close up. These photos were then scanned and incorporated into the computer-assisted design program as a layer. After being traced, the photographs were dropped out, leaving behind an exact image of the element. As well as documenting Coronet's asfound condition, these drawings will be used to catalogue and identify joinery elements as they are removed so that they can be replaced later in the restoration. Beginning in the fall of 200 1, the yacht's entire interior will be systematically dismantled to prepare for next year's haul-out. J,

Below, the port side ofthe main saloon with carved panels. (Courtesy, !YRS)