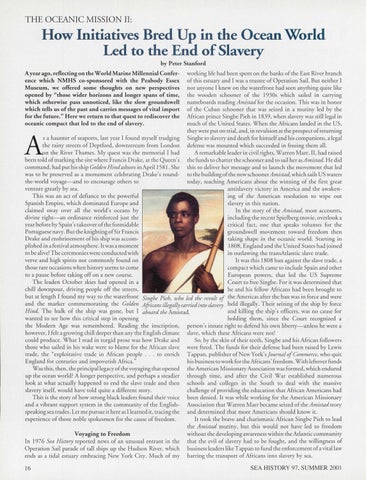 How Initiatives Bred Up in the Ocean World Led to the End of Slavery by Peter Stanford A year ago, reflecting on the World Marine Millennial Conference which NMHS co-sponsored with the Peabody Essex Museum, we offered some thoughts on new perspectives opened by &quot;those wider horizons and longer spans of time, which otherwise pass unnoticed, like the slow groundswell which tells us of the past and carries messages of vital import for the future.&quot; Here we return to that quest to rediscover the oceanic compact that led to the end of slavery.

working li fe had been spent on the banks of the East River branch of this estuary and I was a trustee of Operation Sail. But neither I nor anyo ne I knew on the waterfront had seen anything quite like the wooden schooner of the 1930s which sailed in carrying nameboards reading Amistad for the occasion. This was in honor of the C uban schooner that was seized in a mutiny led by the African prince Singbe Pieh in 1839, when slavery was still legal in much of the United States. When the Africans landed in the US, they were put on trial, and, in revulsion at the prospect of returning a haunter of seaports, last year I fo und myself trudging Singbe to slavery and death for himself and his companions, a legal he rainy streets of D eptford, downstream from London defense was mounted which succeeded in freeing them all. n the River Thames. My quest was the memorial I had A remarkable leader in civil rights, Warren Marr, II, h ad raised been told of marking the site where Francis Drake, at the Queen&#39;s the funds to charter the schooner and to sail her asAmistad. He did command, had put his ship Golden Hind as hore in April 1581. She this to deliver her message and to launch the movement that led was to be preserved as a monument celebrating Drake&#39;s round- to the building of the new schooner Amistad, which sails US waters rhe-world voyage-and to encourage others to today, teaching Americans about the winning of the first great venture greatly by sea. antislavery victory in America and the awakenThis was an act of defiance to the powerful ing of the American resolution to wipe out Spanish Empire, which dominated Europe and slavery in this nation. claimed sway over all the world&#39;s oceans by In the story of the Amistad, mos t acco unts, divine right-an ordinance reinforced just the including the recent Spielberg movie, overlook a year before by Spain&#39;s takeover of the fo rmidable critical fact, one that speaks volumes for the Portuguese navy. But the knighting of Sir Francis gro undswell movement toward freedom then Drake and enshrinement of his ship was accomtaking shape in the oceanic wo rld. Starting in plished in a festival atmosphere. It was a moment 1808 , England and the United States had joined to be alive! The ceremonies were conducted wi th in outlawing the transArlantic slave trade. verve and high spirits not commonly found on It was this 1808 ban against the slave trade, a those rare occasions when histo ry seems to come compact which came to include Spain and other to a pause before taking off on a new course. European powers, that led the US Supreme The leaden October skies had opened in a Co urt to free Singbe. For it was determined that chill downpour, driving people off the streets, he and his fello w Africans had been brought to bur at length I found my way to the waterfront Singbe Pieh, who led the revolt of the Americas after the ban was in force and were and the marker commemorating the Golden Africans illegally carried into slavery held illegally. Their seizing of the ship by force H ind. The hulk of the ship was gone, bur I aboard the Amistad. and killing the ship&#39;s officers, was no cause for wanted to see how this critical step in opening holding them, since the Co urt recognized a the Modern Age was remembered. Reading the inscription, person&#39;s innate right to defend his own liberty-unless he were a however, I felt a growing chill deeper than any the English climate slave, which these Africans were not! So, by the skin of their teeth, Singbe and his African followers could produce. What I read in turgid prose was how Drake and those who sailed in his wake were to blame for the African slave were freed. T he funds for their defense had been raised by Lewis trade, the &quot;exploitati ve trade in African people ... to enrich Tappan, publisher of New York&#39;s journal of Commerce, who quit England for centuries and impoverish Africa.&quot; his business to wo rk forrheAfricans&#39; freedom. With leftover funds Was this, then, the principal legacy of the voyaging that opened the American Missionary Association was formed, which endured up the ocean world? A longer perspective, and perhaps a steadier through rime, and after the C ivil War established numerous look at what actually happened to end the slave trade and then schools and colleges in the South to deal with the massive slavery itself, would have told quite a different story. challenge of providing the education that African Americans had This is the story of how strong black leaders found their voice been denied. It was while working for the American Missionary and a vibrant support system in the communiry of the English- Association that Warren Marr became seized of theAmistad story speaking sea trades. Let me pursue it here as I learned it, tracing the and determined that more Americans should know it. experience of those noble spokesmen for the cause of freedom. Ir took the brave and charismatic African Singbe Pieh to lead the Amistad mutiny, bur this wo uld not have led to freedom Voyaging to Freedom without the developing awareness within the Atlantic communiry In 1976 Sea History reported news of an unusual entrant in the that the evil of slavery had to be fo ught, and the willingness of Operation Sail parade of tall ships up the Hudson River, which business leaders like T appan to fund the enforcement of a viral law ends as a tidal estuary embracing New York C iry. Much of my barring the transport of Africans into slavery by sea.