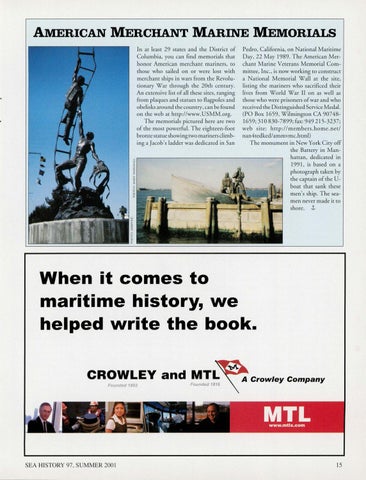 AMERICAN MERCHANT MARINE MEMORIALS In at least 29 states and the District of Columbia, yo u can find memorials chat honor American merchant mariners, to those who sailed on or were lost with merchant ships in wars from the Revolutionary War through the 20th century. An extensive list of all these sites, ranging from plaques and statues co flagpoles and obelisks aro und the country, can be found on the web at http://www.USMM.o rg. The memorials pictured here are two of the most powerful. T he eighteen-foot bronze statue showing two mariners climbing a Jacob&#39;s ladder was dedicated in San

Pedro, California, on National Maritime Day, 22 May 1989. The American Merchant Marine Veterans Memorial Committee, Inc., is now working to construct a National Memorial Wall at the site, listing the mariners who sacrificed their lives from World War II on as well as those who were prisoners of war and who received the Distinguished Service Medal. (PO Box 1659, Wilmington CA 907481659; 310 830-7899; fax: 949 215-3237; web site: http:/ / members.home.net/ nan4tedked/ammvmc.html) The monument in New York City off the Battery in Manhattan, dedicated in 1991, is based on a photograph taken by the captain of the Uboat that sank these men&#39;s ship. The seamen never made it to shore. J,

When it comes to maritime history, we helped write the book. CROWLEY and Founded 1892