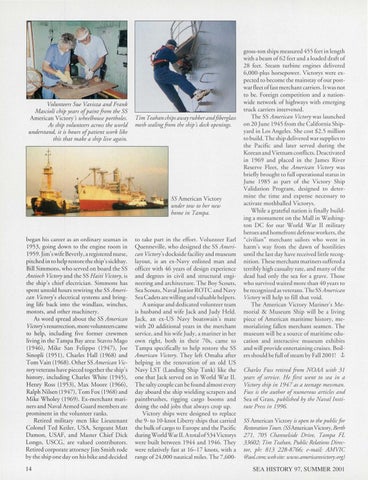 Volunteers Sue Vavisza and Frank Mascioli chip years ofpaint from the SS Ameri can Victory'.> wheelhouse portholes. As ship volunteers across the world understand, it is hours ofpatient work like this that make a ship live again.

to rake part in the effort. Volunteer Earl Q uenneville, who des igned rhe SS American Victory's dockside fac ili ty and museum layo ut, is an ex-Navy en listed man and officer with 46 years of design experience and degrees in civil and structural engineering and architecture. The Boy Scours, Sea Scours, Naval Junior ROTC and Navy Sea Cadets are willing and valuabl e helpers. A unique and dedicated volun teer ream is husband and wife Jack and Judy Held. Jack, an ex-US Navy boatswain 's mate with 20 additional years in the merchant service, and his wife Judy, a mariner in her own right, both in their 70s, came to Tampa specifically to help restore the SS American Victory. They left Omaha after helping in the renovation of an old US Navy LST (Landing Ship Tank) like the one rhar Jack served on in Wo rld War II. T he salty couple can be fo und almost every day aboard the ship wielding scrapers and paintbrushes, rigging cargo booms and doing rhe odd jobs rhar always crop up. Victo1y ships were designed ro replace the 9- to 10-knor Liberty ships that carried the bulk of cargo to Europe and the Pacific during World War II. A total of534 Victorys were built between 1944 and 1946. They were relatively fast at 16- 17 knots, with a range of24, 000 nauti cal mil es. The 7,600-

gross-ton ships measured 455 feet in length with a beam of 62 feet and a loaded draft of 28 feet. Steam turb ine engines delivered 6,000-plus horsepower. Victorys were expected to become the mai nstay of our postwar fleet of fast merchant carriers. Ir was nor to be. Foreign competition and a nationwide network of highways with emerging truck carriers interve ned. The SS American Victory was launched on 20 June 1945 from the California Shipyard in Los Angeles. She cost $2.5 milli on to build. T he ship deli vered war supplies to the Pacific and later served during the Korean and Vietnam conflicts. Deactivated in 1969 and pl aced in the James River Reserve Fleer, the American Victory was briefl y brought to full operational status in June 1985 as part of the Victory Ship Validation Program, designed to determine the rime and expense necessary to activate mothballed Viccorys . While a grateful nation is finally building a monument on the Mall in Washington DC for our W orld W ar II military heroes and hom efront defense workers, the "civilian" merchant sailors who went in harm 's way from the dawn of hostilities until rhe last day have received little recognition. These merchant mariners suffered a terrib ly high casual ty rare, and many of the dead had only rhe sea for a grave. T hose who survived waited more than 40 years to be recognized as veterans. The SS American Victory will help to fill that void. T he American Victory Mariner's Memorial & Museum Ship will be a li vin g piece of American mari time history, memorializing fallen merchant seamen. The museum wi ll be a source of maritime education and interactive museum exhibits and wil l provide entertaining cruises. Boilers should be fu ll of steam by Fall 2001 ! ,t