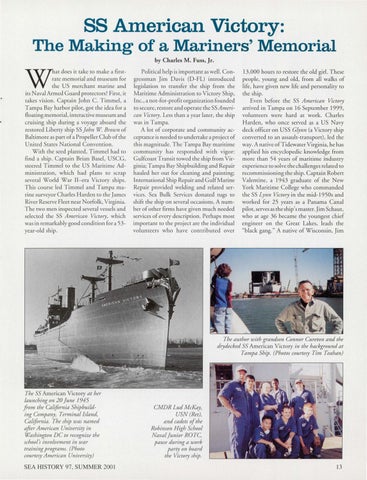 SS American Victory: The Making of a Mariners&#39; Melllorial by Charles M. Fuss, Jr. at does it take to make a firstate memorial and museum for he US merchant marine and its Naval Armed Guard protectors? First, it takes vision. Captain John C. Timmel, a Tampa Bay harbor pilot, got the idea for a floating memorial, interactive museum and cruising ship during a voyage aboard the restored Liberty ship SS john W Brown of Baltimore as part of a Propeller Club of the United States National Convention. With the seed planted, Timmel had to find a ship . Captain Brian Basel, USCG, steered Timmel to the US Maritime Administration, which had plans to scrap several World War II-era Victory ships. T his course led Timmel and Tampa marine surveyor C harles Harden to the James River Reserve Fleet near Norfolk, Virginia. The two men inspected several vessels and selected the SS American Victory, which was in remarkably good conditi on for a 53yea r-old ship.

Political help is important as well. Congress man Jim Davis (D-FL) introduced legislation tO transfer the ship from the Maritime Administration to Victory Ship, Inc., a not-for-profit organization fo unded to secure, restore and operate the SS American Victory. Less than a year later, the ship was in Tampa. A lot of corporate and community acceptance is needed to undertake a project of this magnitude. The Tampa Bay maritime comm unity has responded with vigor: Gulfcoast Transit towed the ship from Virginia; Tampa Bay Shipbuilding and Repair hauled her out for cleaning and painting; International Ship Repair and Gulf Marine Repair provided welding and related services. Sea Bulk Services donated tugs to shifr the ship on several occasions. A number of other firms have given much needed services of every description. Perhaps most important to the project are the individual volunteers who have contributed over

13,000 hours to restore the old girl. These people, yo ung and old, from all walks of life, have given new life and personality to the ship. Even before the SS American Victory arrived in Tampa on 16 September 1999, volunteers were hard at work. C harl es Harden, who once served as a US Navy deck officer on USS Glynn (a Victory ship converted to an assault-transport), led the way. A native of Tidewater Virginia, he has applied his encyclopedic knowledge from more than 54 years of maritime industry experience to solve the challenges related to recommissioning the ship . Captain Robert Valentine, a 1943 graduate of the New York Maritime College who commanded the SS Lynn Victory in the mid-1950s and worked for 25 years as a Panama Canal pilot, serves as the ship&#39;s master. Jim Schaut, who at age 36 became the yo ungest chief engineer on the Great Lakes, leads the &quot;black gang.&quot; A native of Wisconsin, Jim

The author with grandson Connor Cureton and the drydocked SS American Victory in the background at Tampa Ship. (Photos courtesy Tim Teahan)

The SS American Victory at her launching on 20 June 1945 from the California Shipbuilding Company, Terminal Island, California. The ship was named after American University in Washington DC to recognize the school&#39;s involvement in war training programs. (Photo courtesy American University)