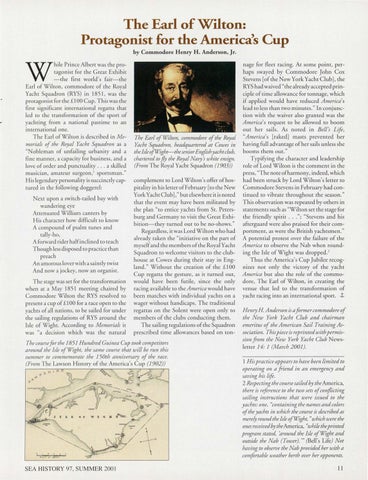 The Earl of Wtlton: Protagonist for the America&#39;s Cup by Commodore Henry H. Anderson, Jr.

hile Prince Albert was the protago nist for the G reat Exhibit - the first world&#39;s fair- the Earl of W ilton , commodore of the Royal Yacht Squadron (RYS) in 185 1, was the pro tago nist for the fl 00 C up. T his was the first signi fica nt international regatta that led to the transfo rmation of the sport of yachting fro m a national pastime to an international one. T he Earl of Wilton is described in Mem orials of the Royal Yacht Squadron as a &quot;Nobleman of unfailing urbani ty and a fin e manner, a capacity for business, and a love of order and punctuality . .. a skilled musician, amateur surgeon, 1 sportsman.&quot; His legendary personality is succincdy captured in the following doggerel: Next upon a switch-railed bay with wandering eye Attenuated William canters by His character how difficult to know A compound of psalm tunes and tally-ho, A forwa rd rider half inclined to teach T hough less disposed to practice than preach An amorous lover with a sai n dy twist And now a jockey, now an orga nist.

T he stage was set for the transfo rmation when at a May 1851 meeting chaired by Co mmodore Wilton the RYS resolved to present a cup of fl 00 for a race open to the yachts of all nations, to be sailed fo r under the sailing regulations of RYS around the Isle of Wight. According to Memorials it was &quot;a decision which was the natural

complement to Lord W ilton &#39;s offer of hospitality in his Jeerer of February [to the New York Yacht C lub),&quot; bur elsewhere it is noted that the event may have been militated by the plan &quot;to entice yachts fro m Sr. Petersburg and Germany to visit the Great Exhibition- they turned out to be no-shows.&quot; Regardless, it was Lord Wilto n who had already taken the &quot;initiative on the part of myself and the members of the Royal Yacht Squadro n to welcome visitors to the clubhouse at Cowes during their stay in England .&quot; W ithout the creation of the ÂŁ 100 C up regatta the gesture, as it turned out, wo uld have been fu tile, since the only racing available to the America wo uld have been matches with individual yachts on a wager without handicaps. T he traditional regattas on th e Solent we re open only to members of the clubs co nducting them. The sailing regulati ons of the Squadron p rescri bed time allowances based on ton-

The course for the 1851 H undred Guinea Cup took competitors around the Isle of Wight, the same course that wiff be run this summer to commemorate the l 5 0th anniversary of the race. (From T he Lawson Histo ry of the America&#39;s C up (1902))

nage fo r fl eet racing. At some point, perhaps swayed by Commodore John C ox Stevens [of the N ew York Yacht C lub] , the RYS had waived &quot;the already accepted principle of time allowance for tonnage, which if applied wo uld have reduced America&#39;s lead to less than two minutes.&quot; In conjunction with the waive r also granted was the America&#39;s request to be allowed to boom o ut h er sails. As no ted in Bell&#39;s Life, &quot;America&#39;s [raked] mas ts prevented her having full advantage of her sails unless she booms them our. &quot; Typifying the character and leadership role of Lo rd W ilton is the comment in the press, &#39;The note ofh armony, indeed, which h ad been struck by Lord Wilton&#39;s letter to Commodore Stevens in February had continued to vibrate throughout the season. &quot; T his observation was repeated by others in statements such as &quot;Wilton set the stage for the fri endl y spirit .. .&quot;; &quot;Stevens and his afterguard were also praised for their comportment, as were the British yachtsmen. &quot; A potential protest over the failure of the America to observe the Nab when rounding the Isle of W ight was dropped. 2 T hus th e America&#39;s C up Jubilee recognizes no t only the victory of the yacht America but also the role of the commodore, T he Earl of W ilton, in creating the venue that led to the transformation of yacht racing into an international sport. ,!, H enry H . Anderson is a former commodore of the New York Yacht Club and chairman emeritus of the American Sail Training Association. This piece is reprinted with permission from the New York Yacht Club N ewsletter 14: 1 (March 2 001). 1 His practice appears to have been Limited to operating on a friend in an emergency and saving his Life. 2 Respecting the course sailed by the America, there is reference to the two sets ofconflicting sailing instructions that were issued to the yachts: one, &quot;containing the names and colors ofthe yachts in which the course is described as merely round the Isle ofWight, &quot;which were the ones received by the America, &quot;while theprinted program stated, &#39;around the Isle of Wight and outside the Nab (Tower).&quot;&#39; (Bell&#39;s Life) Not having to observe the Nab provided her with a comfortable weather berth over her opponents.