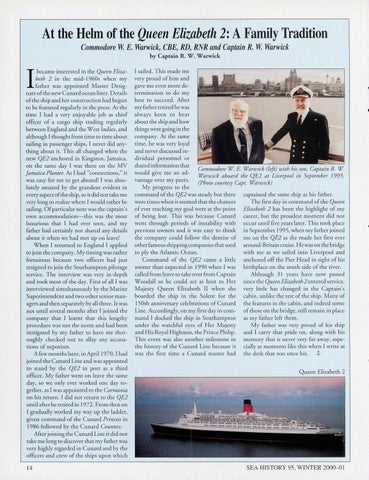 At the Helm of the Queen Elizabeth 2: A Family Tradition Commodore W: E. Warwick, CBE, RD, RNR and Captain R. W: Warwick by Captain R. W. Warwick became interested in the Queen Elizabeth 2 in the mid-1960s when my father was appointed Master Designate of the new Cunard ocean liner. Details of the ship and her construction had begun to be featured regularly in the press. At the time I had a very enjoyable job as chief officer of a cargo ship trading regularly between England and the West Indies, and altho ugh I thought from time to time about sailing in passenger ships, I never did anything about it. This all changed when the new QE2 anchored in Kingston, Jamaica, on the same day I was there on the MV Jamaica Planter. As I had &quot;connections,&quot; it was easy for me to get aboard! I was absolutely amazed by the grandeur evident in every aspect of the ship, so itdid not take me very long to realize where I would rather be sailing. Of particular note was the captain&#39;s own accommodation-this was the most luxurious that I had ever seen, and my father had certainly not shared any details about it when we had met up on leave! When I returned to England I applied to join the company. My timing was rather fortuitous because two officers had just resigned to join the Southampton pilotage service. The interview was very in-depth and took most of the day. First of all I was interviewed simultaneously by the Marine Superintendent and two other senior managers and then separately by all three. I twas not until several months after I joined the company that I learnt that this lengthy procedure was not the norm and had been instigated by my father to have me thoroughly checked out to allay any accusations of nepotism. A few months later, in April 1970, I had joined the Cunard Line and was appointed to stand by the QE2 in port as a third officer. My father went on leave the same day, so we on ly ever worked one day together, as I was appointed to the Carmania on his return. I did not return to the QE2 until after he retired in 1972. From then on I gradually worked my way up the ladder, given command of the Cunard Princess in 1986 followed by the Cunard Countess. After joining the Cunard Line it did not take me long to discover that my father was very highly regarded in Cunard and by the officers and crew of the ships upon which

I sailed. This made me very proud of him and gave me even more determination to do my best to succeed. After my father retired he was always keen to hear about the ship and how things were going in the company. At the same time, he was very loyal and never discussed individual personnel or shared information that Commodore W E. Warwick (left) with his son, Captain R. W would give me an adWarwick aboard the QE2 at Liverpool in September 1995. vantage over my peers. (Photo courtesy Capt. Warwick) My progress to the command of the QE2 was steady but there captained the same ship as his father. were times when it seemed that the chances The first day in command of the Queen of ever reaching my goal were at the point Elizabeth 2 has been the highlight of my of being lost. This was because Cunard career, but the proudest moment did not went through periods of instabiliry with occur until five years later. This took place previous owners and it was easy to think in September 1995, when my father joined the company could follow the demise of me on the QE2 as she made her first ever other famous shipping companies that used around-Britain cruise. He was on the bridge with me as we sailed into Liverpool and to ply the Atlantic Ocean. Command of the QE2 came a little anchored off the Pier Head in sight of his sooner than expected in 1990 when I was birthplace on the south side of the river. called from leave to take over from Captain Although 31 years have now passed Woodall so he could act as host to Her since the Queen Elizabeth 2 entered service, Majesty Queen Elizabeth II when she very little has changed in the Captain&#39;s boarded the ship in the Solem for the cabin, unlike the rest of the ship. Many of l 50th anniversary celebrations of Cunard the features in the cabin, and indeed some Line. Accordingly, on my first day in com- of those on the bridge, still remain in place mand I docked the ship in Southampton as my father left them. My father was very proud of his ship under the watchful eyes of Her Majesty and His Royal Highness, the Prince Philip. and I carry that pride on, along with his This event was also another milestone in memory that is never very far away, espethe history of the Cunard Line because it cially at moments like this when I write at was the first time a Cunard master had the desk that was once his. ,t Queen Elizabeth 2