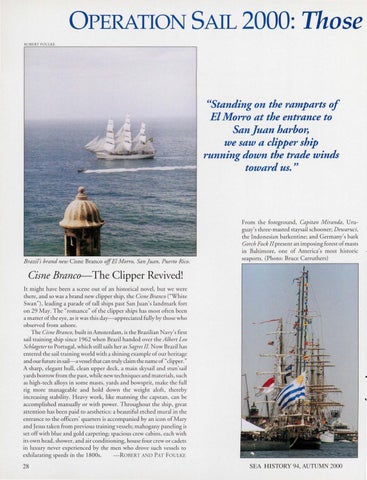 &quot;Standing on the ramparts of El Morro at the entrance to San Juan harbor, we saw a clipper ship running down the trade winds toward us. &quot;

Cisne Branco-The Clipper Revived! le might have been a scene our of an historical novel, bur we were there, and so was a brand new clipper ship, the Cisne Branco (&quot;White Swan&quot;), leading a parade of rail ships past Sa n Juan&#39;s landmark forr on 29 May. The &quot;romance&quot; of the clipper ships has most often been a marrer of the eye, as it was this day-appreciated fully by those who observed from ashore. The Cisne Branco, built in Amsterdam, is the Brazilian Navy&#39;s first sail training ship since 1962 when Brazi l handed over the Albert Leo Schlageter to Portugal, which sti ll sa ils her as Sagres II.Now Brazil has entered the sail training wo rld with a shining example of our heritage and our future in sail-a vessel that can truly claim the name of &quot;clipper.&quot; A sharp, elegant hull , clean upper deck, a main skysail and smn &#39;sai l yards borrow from the past, wh ile new techniques and materials, such as high-tech alloys in some masts, yards and bowsprit, make the fu ll rig more manageable and hold down the weight aloft, thereby increasing stability. Heavy work, like manning the capstan, can be accomplished manually or with power. Throughout the ship, great arrention has been paid to aesthetics: a beautiful etched mural in the entrance to the officers&#39; quarters is accompanied by an icon of Mary and Jesus taken from previous training vessels; mahogany paneling is set off with blue and gold carpeting; spacious crew cabins, each with its own head, shower, and air conditio ning, house four crew or cadets in luxury never experienced by the men who drove such vessels to exhilarating speeds in the 1800s. -ROBERT AND PAT FOULKE