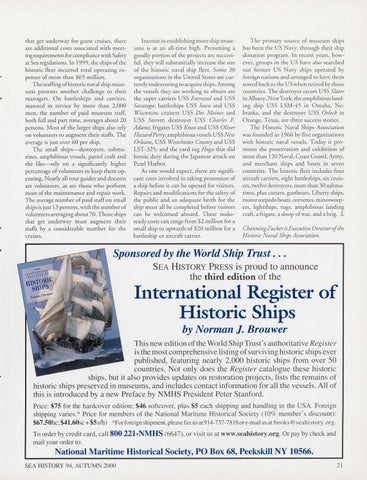 char gee underway for guest cruises, there are additional costs associated with meeting requirements for compliance with Safety at Sea regulations. In 1999, the ships of the historic fleet incurred total operaring expenses of more than $65 millio n. The sraffingofhistoric naval ship museums presents another challenge to their managers. On battles hips and carriers, manned in service by more rhan 2,000 men, the number of paid museum staff, both full and part time, averages about 20 persons. Most of the larger ships also rely on volunteers to augment their staffs. T he average is jusr over 60 per ship . The small ships-destroyers, submarines, amphibious vessels, patrol craft and the like-rely on a significantly higher percentage of volunteers to keep them operating. Nearly all tour guides and docents are volunteers, as are those who perform mosr of the maintenan ce and repair work. The average number of paid staff on small ships is just 13 persons, with the number of volunteers averaging about 70. Those ships that get underway must augment rheir staffs by a considerable number for the crmses.

Interest in esrablishing more ship museums is at an all-time high. Presuming a goodly portion of the projects are successfu l, they will substantially increase the size of the historic naval ship fleer. Some 30 organizations in the Unired States are currendyendeavoring to acquire ships. Among the vessels they are working to obtain are the super carriers USS Forrestal and USS Saratoga; battleships USS Iowa and USS Wisconsin; cruisers USS Des Moines and USS Sterett; desuoyer USS Charles F. Adams; frigates USS Knox and USS Oliver Hazard Perry; amphibious vessels USS New Orleans, USS Westchester County and USS LST-325; and rhe yard rug Hoga that did heroic duty during rhe Japanese arrack on Pearl Harbor. As one wo uld expect, there are significant costs involved in taking possession of a ship before it can be opened for visitors. Repairs and modificarions for the safety of the public and an adequate berth for the ship must all be completed before visitors can be welcomed aboard. These makeready costs can range from $2 million for a small ship to upwards of $20 million for a bartleship or aircraft carrier.

The primary source of museum shi ps has been the US Navy, through their ship donation program. In recent years, however, groups in the US have also searched out former US Navy ships operated by foreign nations and arranged to have them rowed back to the US when rerired by chose countries. The destroyer escort USS Slater in Albany, New York, rheamphibiouslanding ship USS LSM-45 in Omaha, Nebraska, and the destroyer USS Orleck in Orange, Texas, are three success srories. The Historic Naval Ships Association was founded in 1966 by five organizations with historic naval vessels. Today ir promotes the preservation and exhibition of more than 120 Naval, Coast G uard, Army, and merchant ships and boats in seven countries. T he historic fleer includes four aircraft carriers, eight battleships, six cruisers, rwelve destroyers, more than 30 submarines, plus curters, gunboars, Liberty ships, motor torpedo boars, corvenes, minesweepers, lightships, tugs, amphibio us landing crafr, a frigare, a sloop of war, and a brig . .t Channing Zucker is Executive Director ofthe Historic Naval Ships Association.

Sponsored by the World Ship Trust ... is proud to announce the third edition of the

International Register of Historic Ships by Norman J. Brouwer This new edition of the World Ship Trust's authoritative Register is the most comprehensive listing of surviving hi storic ships ever published, featuring nearly 2,000 historic ships from over 50 countries. Not only does the Register catalogue these historic ships, but it also provides updates on restoration projects, lists the remains of historic ships preserved in museums, and includes contact information for all the vessels. All of this is introduced by a new Preface by NMHS President Peter Stanford. Price: $75 for the hardcover edition ; $46 softco ver, plus $5 each shipping and handling in the USA. Foreign shipping varies.* Price for members of the National Maritime Historical Society (l 0% member's discount): $67.50hc; $41.60sc+$5s/h) *Forforeign shipment, please fax usat9 14-737-78 16 ore-mail us at books@seahistory.org. To order by credit card, call 800 221-NMHS (6647), or visit us at www.seahistory.org. Or pay by check and mail your order to:

6 An Early History of the National Maritime Historical Society and the Kaiulani Project: Part 1, by Alan D. Hutchison • 8 USS Olympia: A Su...

6 An Early History of the National Maritime Historical Society and the Kaiulani Project: Part 1, by Alan D. Hutchison • 8 USS Olympia: A Su...