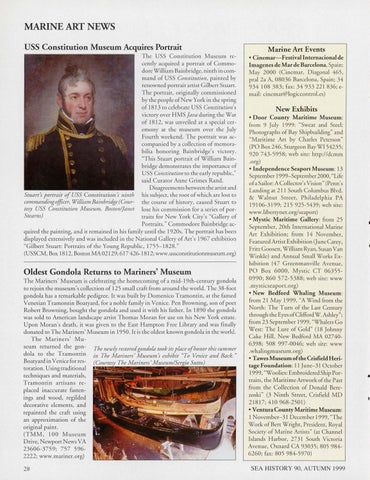 The USS Constitution Museum recently acquired a portrait of Commodore William Bainbridge, ninth in command of USS Constitution, painted by renowned portrait artist Gilbert Stuart. T he portrait, originally commissioned by the people ofNew York in the spring of 1813 to celebrate USS Constitution&#39;s victory over HMS Java during the War of 1812, was unveiled at a special ceremony at the museum over the July Fourth weekend. The portrait was accompanied by a collection of memorabilia honoring Bainbridge&#39;s victory. &quot;This Stuart portrait of William Bainbridge demonstrates the importance of USS Constitution to the early republic,&quot; said Curator Anne Grimes Rand. Disagreements between the artist and Stuart&#39;s portrait of USS Constitution&#39;s ninth his subject, the root of which are lost to commanding officer, William Bainbridge (Cour- the course of history, caused Stuart to tesy USS Constitution Museum, Bostonljanet lose his commiss ion for a series of porStearns) traits for New York City&#39;s &quot;Gallery of Portraits.&quot; Commodore Bainbridge acquired the painting, and it remained in his family ~ntil the 1920s. Th; portrait h~s b ~en displayed extensively and was included in the N ano nal Gallery,~f Art s 1967 exh1bmon &quot;Gilbert Stuart: Portraits of the Young Republic, 1755-1828. (USS CM, Box 1812, Boston MA 02129; 617 426-1812; www.ussconstitutionmuseum.org)

Oldest Gondola Returns to Mariners&#39; Museum The Mariners&#39; Museum is celebrating the homecoming of a mid-19th-century gondola to rejoin the museum&#39;s collection of 125 smal&#39;. craft from around the wo1:ld. The 38-foot gondola has a remarkable pedigree. It was built. b~ Dom~n1co Tramonn.n, at the famed Venetian T ramontin Boatyard, for a noble family 111 Vemce. Pen Brown111g, son of poet Robert Browning, bought the gondola and used it with his father. In 1890 the gondola was sold to American landscape artist Thomas Moran for use on his New York estate. Upon Moran&#39;s death, it was given to the East Hampton Free Library an~ was finally donated to The Mariners&#39; Museum in 1950. It is the oldest known gondola 111 the world. The Mariners&#39; Museum returned the gon- The newly restored gondola took its place ofhonor this summer dola to the Tramontin in The Mariners&#39; Museum&#39;s exhibit &#39;&#39;To Venice and Back.&quot; Boatyard in Venice for res- (Courtesy The Mariners&#39; Museum/Sergio Sutto) toration. Using traditional techniques and materials, Tramontin artisans replaced inaccurate fastenings and wood, regilded decorative elements, and repainted the craft using an approximation of the original paint. (TMM, 100 Museum Drive, Newport News VA 23606-3759; 757 5962222; www.mariner.org)

9 THE CAPE HORN ROAD, XX. The Voyage Is Toward Freedom, by Peter Stanford • 14 The Prize Game, by Donald A. Petrie • 18 THE TALL SHIPS OF OPERATION SAIL 2000: The Sail Training Ship Danmark, by Suzanne McMurray Ko and Capt. O. P. Nielsen • 20 "A Roving Band of Riggers and Shipwrights" Refits the Balclutha and Moves on, by Steven A. Hyman • 24 Writer, Painter, Seafarer: The John J. Bertonccini Collection, by David Hull • 29 Grandfather and the Mystery Ship, by Karl F Stephens, MD • 32 MODELMAKERS' CORNER. Down to the Sea in Shoe Boxes: The Art of Naval Miniatures, by Peter Sorensen • 36 The Ships of the San Francisco Gold Rush, by Shelley Reid • 38 Round the World and Home Again: The Picton Castle Returns to Nova Scotia, by Angelo Cerchione •