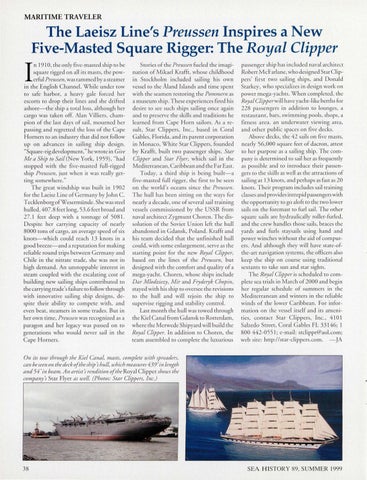 The Laeisz Line's Preussen Inspires a New Five-Masted Square Rigger: The Royal Clipper n 19 10, the only fi ve- masted ship to be square rigged on all its m as ts, the powerful Preussen, was ram med by a steamer in the English C hannel. Whi le under tow to safe harbor, a heavy gale forced her escorts to drop their lines and she drifted ashore-the ship a total loss, although her cargo was taken off. Alan Villiers, champion of th e las t days of sail , mourned her passing and regretted the loss of the Cape Homers to an indusu y that did not follow up on advances in sailin g ship design. "Square-rig development," he wrote in Give MeaShiptoSail(NewYork, 1959), "had stopped with th e fi ve-m asted full-rigged ship Preussen, just when it was really getting somewhere. " The great windship was builr in 1902 for rhe Lae isz Line of Ge rmany by John C. Tecklenborgof Wesermi.inde. She was steel hull ed, 407.8 feerlong, 53.6 feet broad and 27. 1 feet deep wit h a tonnage of 508 1. Despite her carrying capacity of nearly 8000 tons of ca rgo, an average speed of six knots-whi ch could reach 13 knots in a good breeze-a nd a reputation for making reli able round uips between Germany a nd C hile in the nitrate trade, she was not in high demand. An unstoppable interest in steam coup led wirh the escalating cost of building new sailing ships contributed to thecartyingtrade's failure to fo llow through with innovative sailing ship des igns, despite their ab ili ty to compete w ith , and even beat, steam ers in som e trades. But in her own rime, Preussen was recognized as a parago n and her legacy was passed o n to generations who would never sa il in the Cape Homers.

Sto ries of the Preussen fueled the imaginatio n of Mikael Krafft, whose childhood in Stockholm included sailing hi s own vessel to th e Aland Islands and time spent with the seamen resto rin g the Pommern as a museum ship. These experiences fired his desire to see such ships sailing once again and to preserve the ski lls and traditio ns he learned from Cape Horn sailors . As a result, Star Clippers, Inc., based in Coral Gab les, Florida, and its parent co rpo ra tion in Monaco , White Star C lippers, fo unded by Krafft, built two passe nger ships, Star Clipper and Star Flyer, whi ch sail in the Mediterranean, Caribbean and rhe Far East. Today, a third ship is being builr-a five-masted full rigger, the first to be seen o n the wo rld's oceans since the Preussen. T he hull has been sitting on rhe ways for nearl y a decade, one of several sail training vessels commissioned by rhe USSR from naval architect Zygmunt C ho ren. The dissolution of the Soviet Union left the hull abandon ed in Gdansk, Poland. Krafft and his team decided that the unfinished hull co uld , wi th some enl arge ment, serve as the starting point for the new Royal Clipper, based on the lines of the Preussen, but des igned w ith the comfo rt and quali ty of a mega-yacht. C horen, whose ships include Dar Mlodziezy, Mir and Fryderyk Chopin , stayed with his ship to oversee the revisions to rhe hull and wi ll rejoin the ship to supervise rigging and stability control. Last month the hull was towed through the Kiel Canal from G dansk to Rotterdam, where the Merwede Shipya rd will build rhe Royal Clipper. In add itio n to C horen, rhe team assembled to complete the luxurious

On its tow through the Kiel Canal, masts, complete with spreaders, can be seen on the deck ofthe ship '.r hull, which measures 439 'in Length and 54' in beam. An artists rendition ofthe Royal C lipper shows the company'.r Star Flye r as well. (Photos: Star Clippers, Inc.)