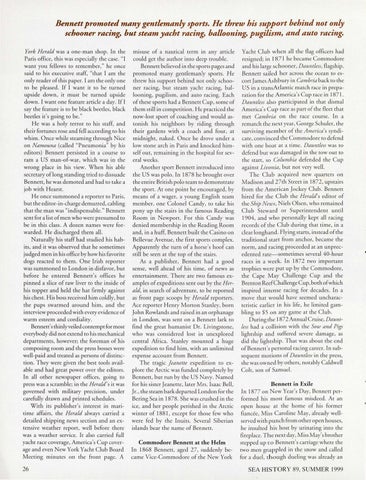 Bennett promoted many gentlemanly sports. He threw his support behind not only schooner racing, but steam yacht racing, ballooning, pugi1ism, and auto racing. York H erald was a one-man shop. In the misuse of a nautical term in any article Paris office, this was especial ly the case. "I could get the author into deep trouble. want yo u fellows to remember," he once Bennett beli eved in the sporrs pages and said to his executive staff, "that I am the promoted many gentlemanly sports. He only reader of this paper. I am the only one threw his support behind not only schooto be pleased. If I want it to be turned ner racing, but steam yacht racin g, balupside down, it must be turned upside looning, pugilism , and auto racing. Each down. I want one feature article a day. Ifl of these sports had a Bennett C up , some of say the feature is to be black beetles, black them still in co mpetition. H e practiced the beetles it's going to be." now-lost sport of coaching and wo uld asHe was a holy terror to his staff, and ton ish his neighbors by riding through their fortunes rose and fell according to his their gardens with a coach and four, at whim. Once while steaming through Nice midnight, naked. On ce he drove under a on Namouna (called "Pneumonia" by his low stone arch in Paris and knocked himeditors) Bennett persisted in a course to self out, remaining in the hospital for sevram a US man-of-war, which was in the eral weeks. wrong place in his view. When his able Another sport Bennett introduced into secretary oflong standing tried to dissuade the US was polo. In 1878 he brought over Bennett, he was demoted and had to rake a the entire British polo team to demonstrate job with H earst. the sport. At one point he encouraged, by He once summo ned a reporter to Paris, means of a wager, a young English team bur the editor-in-charge demurred, cabling member, one Co lonel Candy, to rake his that the man was "indispensable. " Bennett pony up the stairs in the famous Reading sent for a list of men who were presumed to Room in Newport. For this Candy was be in this class. A dozen names were for- denied membership in th e Reading Room warded. He discharged them all. and, in a huff, Bennett built the Casino on N aturally his staff had studied his hab- Bellevue Avenue, the first sports complex. its, and it was observed that he sometimes Apparently the turn of a horse's hoof can judged men in his office by how his favorite still be seen at the top of the stairs. As a publish er, Bennett had a good dogs reacted to them . One Irish reporter was summoned to London in disfavor, bur sense, well ahead of his time, of news as before he entered Bennett's offices he entertainment. There are two famo us expinned a slice of raw liver to the inside of amples of expeditions sent out by the Herhis topper and held the hat firml y against ald, in search of adventure, to be reported his chest. His boss received him coldly, but as front page scoo ps by H erald reporters. the pups swarmed around him , and the Ace reporter H en ry Morron Stanley, born interview proceeded with every evidence of John Rowlands and raised in an orphanage warm esteem and cordialiry. in London, was sent on a Bennett lark to Bennett's thinly veiled contempt for most find the great hum anist Dr. Livingstone, everybody did not extend to his mechanical who was considered lost in unexplored departments, however; the foreman of his central Africa. Stanley mounted a huge composing room and the press bosses were expedition to find him , with an unlimited well-paid and treated as persons of distinc- expense account from Bennett. tion. T hey were given the best tools availThe tragic J eanette expedition to exable and had great power over the editors. plore the Arctic was funded completely by In all other newspaper offices, going to Bennett, but run by the US Navy. Named press was a scramble; in the H erald's it was for his sister J eanerte, later Mrs. Isaac Bell, governed with military precision, under Jr. , the steam bark de parred London for the Bering Sea in 1878. She was crushed in the carefully drawn and printed schedu les. With its publisher's interest in mari- ice, and her people perished in the Arctic time affairs, the Herald always carried a winter of 1881 , except for those few who derailed shipping news section and an ex- were fed by the Inuits. Several Siberian tensive weather report, well before there islands bear the name of Bennett. was a weather service. Ir also carried full yacht race coverage, America's C up coverCommodore Bennett at the Helm age and even New York Yacht C lub Board In 1868 Bennett, aged 27, suddenl y beM eeting minutes on rhe front page. A came Vice-Commodore of the New York

Yacht Club when all the flag officers had resigned; in 187 1 he became Commodore and his large schooner, Dauntless, flags hip. Bennett sailed h er across the ocean to escort James Ash bury in Cambria back to the US in a transAtlantic match race in preparation fo r th e America's C up race in 187 1. Dauntless also parti cipated in that dismal America's C up race as part of th e fl eer that mer Cambria on the race course. In a rematc h the next yea r, George Schuler, the surviving member of the America's syndicate, convinced the Commodore to defend with one boat at a tim e. Dauntless was to defend but was damaged in the row out to the start, so Columbia defended rh e C up against Livonia, but not very well. The C lub acquired new quarters on Madiso n and 27th Street in 1872, upstairs from the American Jockey C lub . Bennett hired for the C lub the H erald's editor of the Ship News, Niels Olsen, who remained C lub Steward o r Superintendent un ti l 1904, and wh o personally kept all racing reco rds of the C lub during that rime, in a clear longhand. Flying starts, insread of the traditional start from anchor, became the norm, and racing proceeded at an unprecedented rare-sometimes several 40-hour races in a week. In 1872 two important trophies were put up by the Commodore, rhe Cape May C hallenge C up and the Brenton Reef C hallenge C up, both of which inspired intense racing for decades. In a move that would have seemed uncharacteri stic earli er in his life, he limited gambling to $5 on any game at the C lub . During the l 872Annual C ruise, Dauntless had a co llision with th e Sow and Pigs lightship and suffered severe damage, as did the lightship. Thar was about the end of Bennett's personal racing career. In subsequ ent motions of Dauntless in the press, she was owned by others, notably Caldwell Colt, so n of Samuel. Bennett in Exile In 1877 on New Year's Day, Bennett performed his most famous misdeed. At an open h ouse at the home of his former fiancee, Miss Caroline May, already wellserved with punch from other open houses, he insulted his host by urinating in to the fireplace. Tfne n ext day, Miss May's brother stepped up co Bennett's ca rriage whe re the two men gra ppled in the snow and called for a duel, though dueling was already an