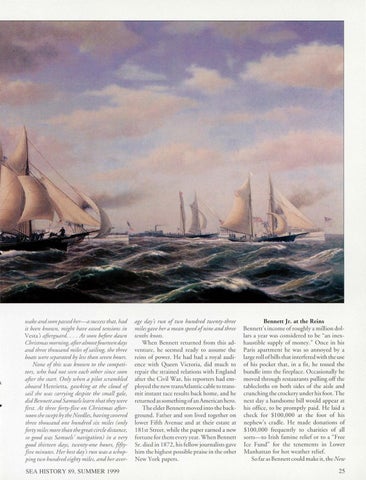 wake and soon passed her-a success that, had it been known, might have eased tensions in Vestas afterguard. ... At soon be.fore dawn Christmas morning, after almostfourteen days and three thousand miles ofsailing, the three boats were separated by less than seven hours. None of this was known to the comp etitors, who had not seen each other since soon after the start. Only when a pilot scrambled aboard H enrietta, gawking at the cloud of sail she was carrying despite the small gale, did Bennett and Samuels learn that they were first. At three forty-five on Christmas afternoon she swept by the Needles, having covered three thousand one hundred six miles (only forty miles more than the great circle distance, so good was Samuels' navigation) in a very good thirteen days, twenty-one hours, fiftyfive minutes. H er best days run was a whopping two hundred eighty miles, and her aver-

Bennett Jr. at the Reins Benn err's inco me of roughly a million do llars a yea r was co nsidered robe "an inexhaustible suppl y of m oney." Once in hi s Paris aparrmenr he was so annoyed by a large ro ll ofbill s rhar interfered wirh rhe use of hi s pocket rh ar, in a fir, he tossed rh e bundle into rhe fireplace. O ccasion all y he moved through res rauram s pulling off th e tablecloths on bo th sides of the aisle and crunching rhe crockery under his foot. The next day a handso me bill wo uld appear at his offi ce, ro be pro mptly paid. H e laid a check fo r $ 100,000 at the fo ot of his nephew's cradl e. H e made donatio ns of $ 100,000 fre quently ro charities of all so rrs-ro Irish fa min e relief o r ro a "Free Ice Fund " fo r th e tenements in Lower Ma nhattan fo r hot wea ther relief. So fa r as Bennett could make it, the New