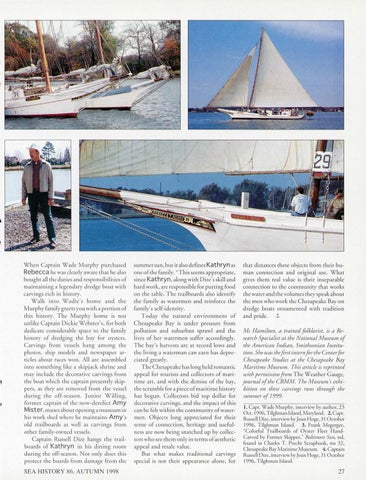 When Captain Wade Murphy purchased Rebecca he was clearly aware that he also bought all the duties and responsibilities of maintaining a legendary dredge boat with carvings rich in history. Walk in to Wadie&#39;s home and the Murphy family greets you with a portion of this history. The Murphy home is not unlike Captain Dickie Webster&#39;s, for both dedicate cons iderable space to the fami ly history of dredging the bay for oysters. Carvings from vessels hang among the photos, ship models and newspaper articles about races won. All are assembled into something like a skipjack shrine and may include the decorative carvings from the boat which the captain presently skippers, as they are removed from the vessel during the off-season . Junior Willing, former captain of the now-derelict Amy Mister, muses abouropeninga museum in his work shed where he maintains Amy&#39;s old trailboards as well as carvings from other family-owned vessels. Captain Russell Dize hangs the trailboards of Kathryn in his dining room during the off-season. Not only does this protect the boards from damage from the

summer sun , but it also defines Kathryn as one of the family. 4 This seems appropriate, since Kathryn , along with Dize&#39;sskill and hard work, are responsible for putting food on the table. The trailboards also identify the family as watermen and reinforce the family&#39;s self-identity. Today the natural environment of Chesapeake Bay is under pressure from pollution and suburban sprawl and the lives of her watermen suffer accordingly. The bay&#39;s harvests are at reco rd lows and the living a waterma n can earn has dep reciated greatly. The Chesapeake has long held romantic appeal for tourists and collectors of maritime art, and with the demise of the bay, the scramble for a piece of maritime history has begun. Collecto rs bid top dollar for decorative carvings, and th e impact of this can be felt within the community of watermen. Objects long appreciated for their sense of connection, heritage and usefulness are now being snatched up by collectors who see them only in terms of aesthetic appeal and resale value. But what makes traditional carvings special is not their appearance alone, for

that distances these objects from their human connection and original use. What gives them real value is their inseparable co nn ectio n to th e community that works the water and the volumes they speak about the men who work th e Chesapeake Bay on dredge boats ornamented with tradition and pride. 1-