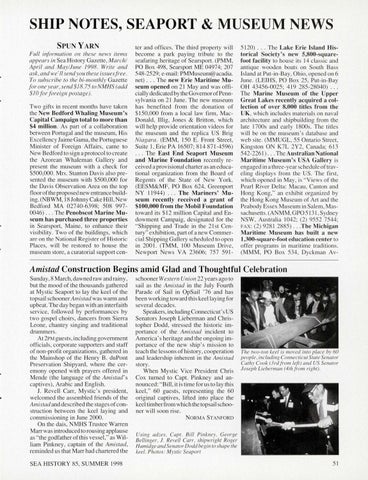 Two gifts in recent months have take n the New Bedford Whaling Museum&#39;s Capital Campaign total to more than $4 million. As part of a collaboration between Portugal and the museum, Hi s Excellency Jaime Gama, the Portuguese Minister of Foreign Affairs, came to New Bedford to sign a protocol to create the Azorean Whaleman Gallery and present the mu seum with a check for $500,000. Mrs. Stanton Davis also presented the museum with $500,000 for the Davis Observation Area on the top floorofthe proposed new entrance building. (NBWM, 18 Johnny Cake Hill, New Bedford MA 02740-6398; 508 9970046) ... The Penobscot Marine Museum has purchased three properties in Searsport, Maine , to enhance their visibility. Two of the buildings, which are on the National Register of Historic Places, will be restored to house the museum store, a curatorial support cen-

ter and offices. The third property will become a park paying tribute to the seafaring heritage of Searsport. (PMM, PO Box 498, Searsport ME 04974; 207 548-2529; e-mail: PMMuseum@acad ia. net) ... The new Erie Maritime Museum opened on 21 May and was official ly ded icated by the Governor of Pennsy lvania on 21 June. The new museum has benefited from the donation of $150,000 from a local law firm , MacDonald, Illig , Jones &amp; Britton, which will help provide orientation videos for the museum and the replica US Brig Niagara. (EMM, 150 E. Front Street, Su ite 1, Erie PA 16507; 814 871-4596) ... The East End Seaport Museum and Marine Foundation recently received a provisional charter as an educational organization from the Board of Regents of the State of New York. (EESM&amp;MF, PO Box 624, Greenport NY 11944) .. . The Mariners&#39; Museum recently received a grant of $100,000 from the Mobil Foundation toward its $12 million Capital and Endowment Campaig, designated for the &quot;Shipping and Trade in the 21st Century&quot; ex hibition , part of a new Commercial Shipping Gallery sched uled to open in 2001. (TMM, 100 Museum Drive, Newport News VA 23606; 757 591-

Amistad Construction Begins amid Glad and Thoughtful Celebration Sunday, 8 March, dawned raw and rainy, but the mood of the thou sands gathered at Mystic Seaport to lay the keel of the topsail schooner Amistad was warm and upbeat. The day began with an interfaith service, followed by performances by two gospel choirs, dancers from Siena Leone, chantey singing and traditional drummers. At 2PM guests, including government officials, corporate supporters and staff of non-profit organizations, gathered in the Mainshop of the Henry B. duPont Preservation Shipyard, where the ceremony opened with prayers offered in Mende (the language of the Amistad&#39;s captives), Arabic and Engli sh. J. Revell Carr, Mystic &#39; s president, welcomed the assembled friends of the Amistad and described the stages of construction between the keel laying and commissioning in June 2000. On the dai s, NMHS Trustee Warren Marr was introduced to ro using applause as &quot;the godfather of this vessel,&quot; as Williain Pinkney, captain of the Amistad, reminded us that Marr had chaitered the SEA HISTORY 85, SUMMER 1998

schooner Western Union 22 years ago to sail as the Amistad in the July Fourth Parade of Sail in OpSail &#39;76 and has been working toward thi s keel laying for several decades. Speakers, including Connecticut&#39;s US Senators Joseph Lieberman and Christopher Dodd, stressed the hi storic importance of the Amistad incident to America&#39;s heritage and the ongoing importance of the new ship &#39;s mission to teach the lessons of hi story , cooperation and leadership inherent in the Amistad story. When Mystic Vice President Chris Cox turned to Capt. Pinkney and announced: &quot;Bill , it is time for us to lay this keel ,&quot; 60 guests, representing the 60 original captives, lifted into place the keel timber from which the topsail schooner will soon rise.

The two-ton keel is moved into place by 60 people , including Connecticut Stare Senator Cathy Cook (3 rd from left) and US Senator Joseph Lieberman (4th from right).