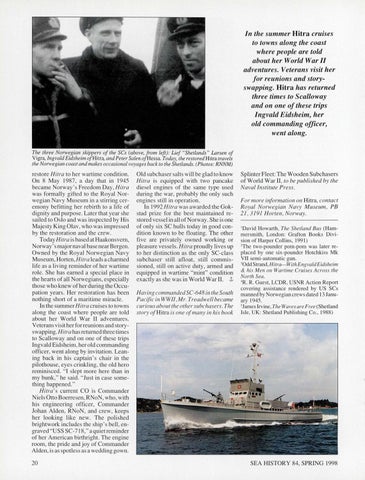 In the summer Hitra cruises

to towns along the coast where people are told about her World War II adventures. Veterans visit her for reunions and storyswapping. Hitra has returned three times to Scalloway and on one of these trips lngvald Eidsheim, her old commanding officer, went along. The three Norwegian skippers of the SCs (above, from left): lief &quot;Shetlands&quot; Larsen of Yigra, Ingvald Eidsheim ofHitra, and Peter Salen ofHessa. Today, the restored Hitra travels the Norwegian coast and makes occasional voyages back to the Shetlands. (Photos: RNNM)

restore Hitra to her wartime condition. On 8 May 1987 , a day that in 1945 became Norway&#39;s Freedom Day, Hitra was formally gifted to the Ro yal Norwegian Navy Museum in a stirring ceremony befittin g her rebirth to a life of dignity and purpose. Later that year she sailed to Oslo and was inspected by His Majesty King Olav, who was impressed by the restoration and the crew. Today Hitra is basedatHaakonsvern , Norway &#39; s major naval base near Bergen. Owned by the Royal Norwegian Navy Museum , Horten,Hitra leads a charmed life as a living reminder of her wartime role. She has earned a special place in the hearts of all Norwegians, especially those who knew of her during the Occupation years. Her restoration has been nothing short of a maritime miracle. In the summer Hitra cruises to towns along the coast where people are told about her World War II adventures. Veterans visit her for reunions and storyswapping. Hitra has returned three times to Scalloway and on one of these trips Ingvald Eidsheim, her old commanding officer, went along by invitation. Leaning back in hi s captain &#39; s chair in the pilothouse, eyes crinkling, the old hero reminisced . &quot;I slept more here than in my bunk,&quot; he said. &quot;Just in case something happened.&quot; Hitra &#39; s current CO is Commander NielsOttoBoerresen,RNoN, who, with hi s engineering officer, Commander Johan Alden, RNoN, and crew, keeps her looking like new . The polished brightwork includes the ship &#39; s bell, engraved &quot;USS SC-7 18,&quot; a quiet reminder of her American birthright. The engine room, the pride and joy of Commander Alden, is as spotless as a wedding gown.

Old subchaser salts will be glad to know Hitra is equipped with two pancake diesel engines of the same type used during the war, probably the only such engines still in operation. In 1992 Hitra was awarded the Gokstad prize for the best maintained restored vessel in all ofNorway. She is one of only six SC hulls today in good condition known to be floating . The other five are pri vately owned working or pleasure vessels . Hitra proudly lives up to her distinction as the only SC-class subchaser still afloat, still commissioned , still on active duty, armed and equipped in wartime &quot;mint&quot; condition exactly as she was in World War II. .t Having commanded SC-648 in the South Pacific in WWII , Mr. Treadwell became curious about the other subchasers. The story ()j&#39;Hitra is one of many in his book