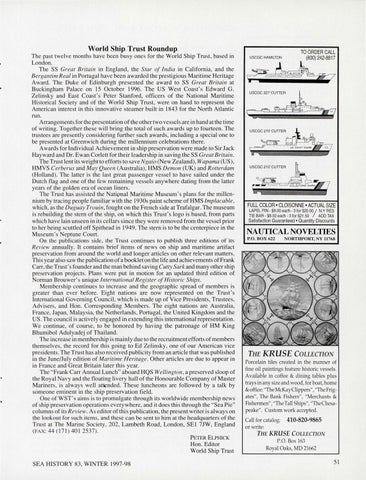 World Ship Trust Roundup The past twe lve months have been busy ones for the World Ship Trust, based in London. The SS Great Britain in England , the Star of India in California, and the Bergantim Real in Portugal have been awarded the prestigious Maritime Heritage Award. The Duke of Edinburgh presented the award to SS Great Britain at Buckingham Palace on 15 October 1996. The US West Coast&#39;s Edward G. Zelinsky and East Coast&#39;s Peter Stanford, officers of the National Maritime Hi stori cal Society and of the World Ship Trust, were on hand to represent the American interest in thi s innovative steamer built in 1843 for the North Atlantic run. Arrangements for the presentation of the othertwo vessels are in hand at the time of writing. Together these will bring t~ e total of such awards up to fourteen. The trustees are presently considering further such awards, including a special one to be presented at Greenwich during the millennium celebrations there. Awards for Individual Achievement in ship preservation were made to Sir Jack Hayward and Dr. Ewan Corlett for their leadership in sav ing the SS Great Britain. The Trust lent its weight to efforts to saveNgaio (New Zealand), Wapama (US), HMVS Cerberus and May Queen (A ustralia), HMS Demon (UK) and Rotterdam (Holland). The latter is the last great p assenger vessel to have sailed under the Dutch flag and one of the few remaining vessels anywhere dating from the latter years of the golden era of ocean line rs. The Trust has assisted the Natipnal Maritime Museum &#39;s pl ans for the millennium by tracing people familiar with the 1930s paint scheme of HMS Implacable, which, as the Duguay Trouin, fought on the French side at Trafalgar. The museum is rebuilding the stern of the ship, on which this Trust&#39;s logo is based, from parts which have lain un seen in its cellars s ince they were removed from the vessel prior to her being scuttled off Spithead in 1949. The stern is to be the centerpiece in the Museum &#39;s Neptune Court. On the publications side, the Trust continues to publi sh three editions of its Review annually. It contains brief ite m s of news on ship and maritime artifact preservation from aro und the world and longer articles on other relevant matters. Thi s year also saw the publication of a booklet on the life and achievements of Frank Carr, the Trust &#39;s founder and the man be hind saving Cutty Sark and many other ship preservation projects. Plans were put in motion for an updated third edition of Norman Brouwer&#39;s unique International Register of Historic Ships. Membership continues to increase and the geographic spread of members is greater than ever before. Eight nations are now represented on the Tru st&#39;s International Governing Council, which is made up of Vice Pres idents, Trustees, Advisers, and Hon . Corresponding M e mbers. The eight nation s are Australia, France, Japan , Malays ia, the Netherlands , Portugal, the United Kingdom and the US. The council is actively engaged in extending this inte rnational representation. We continue, of course, to be honored by having the patronage of HM King Bhumibol Adulyadej of Thailand. The increase in membership is mainly due to therecruitmenteffo rts of members themselves, the record for thi s going to Ed Zelinsky, one of our American vice presidents. The Trust has also received publicity from an article that was publi shed in the June/Jul y edition of Maritime Heritage. Other articles are due to appear in in France and Great Britain later this year. The &quot;Frank Carr Annual Lunch&quot; aboard HQS Wellington, a preserved sloop of the Ro yal Navy and the floating livery hall of the Honourable Company of Master Mari ners, is always we ll attended. These luncheons are followed by a talk by someone eminent in the ship preservation fi eld. One of WST&#39; s aims is to promul gate through its worldwide membership news of ship preservation operations everyw here, and it does thi s through the &quot; Sea Pie&quot; columns of its Review. As editor of this publication , the present writer is always on the lookout for such items, and these can be sent to him at the headquarters of the Trust at The Marine Society, 202, Lambeth Road, London , SEl 7JW, England (FAX: 44 (171) 401 2537). P ETER ELPHICK