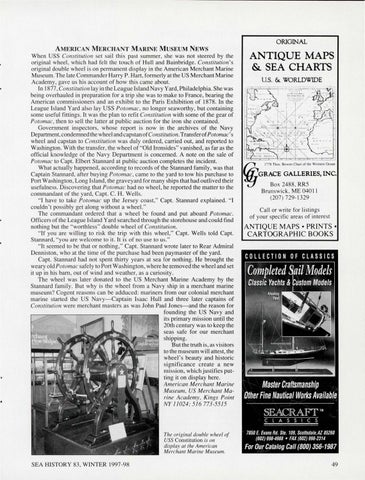 ORIGINAL AMERICAN MERCHANT MARINE MUSEUM NEWS When USS Constitution set sail this past summer, she was not steered by the original wheel, which had felt the touch of Hull and Bainbridge. Constitution&#39;s original double wheel is on permanent display in the American Merchant Marine Museum. The late Commander Harry P. Hart, formerly at the US Merchant Marine Academy, gave us his account of how this came about. In 1877 , Constitution lay in the League Island Navy Yard, Philadelphia. She was being overhauled in preparation for a trip she was to make to France, bearing the American commissioners and an exhibit to the Paris Exhibition of 1878. In the League Island Yard also lay USS Potomac, no longer seaworthy , but containing some useful fittings. It was the plan to refit Constitution with some of the gear of Potomac , then to sell the latter at public auction for the iron she contained. Government inspectors, whose report is now in the archives of the Navy Department, condemned the wheel and capstan of Constitution. Transferof Potomac&#39;s wheel and capstan to Constitution was duly ordered, carried out, and reported to Washington. With the transfer, the wheel of&quot;Old Ironsides&quot; vanished, as far as the official knowledge of the Navy Department is concerned. A note on the sale of Potomac to Capt. Elbert Stannard at public auction completes the incident. What actually happened, according to records of the Stannard family, was that Captain Stannard, after buying Potomac , came to the yard to tow hi s purchase to Port Washington, Long Island , the graveyard for many ships that had outlived their usefulness. Discovering that Potomac had no wheel, he reported the matter to the commandant of the yard, Capt. C. H. Wells. &quot;I have to take Potomac up the Jersey coast,&quot; Capt. Stannard explained. &quot;I couldn&#39;t possibly get along without a wheel.&quot; The commandant ordered that a wheel be found and put aboard Potomac. Officers of the League Island Yard searched through the storehouse and could find nothing but the &quot;worthless&quot; double wheel of Constitution. &quot;If you are willing to risk the trip with this wheel,&quot; Capt. Wells told Capt. Stannard, &quot;you are welcome to it. It is of no use to us.&quot; &quot;It seemed to be that or nothing,&quot; Capt. Stannard wrote later to Rear Admiral Denniston, who at the time of the purchase had been paymaster of the yard. Capt. Stannard had not spent thirty years at sea for nothing. He brought the weary old Potomac safely to Port Washington, where he removed the wheel and set it up in his barn, out of wind and weather, as a curiosity. The wheel was later donated to the US Merchant Marine Academy by the Stannard family. But why is the wheel from a Navy ship in a merchant marine museum? Cogent reasons can be adduced: mariners from our colonial merchant marine started the US Navy-Captain Isaac Hull and three later captains of Constitution were merchant masters as was John Paul Jones-and the reason for founding the US Navy and its primary mission until the 20th century was to keep the seas safe for our merchant shipping. But the truth is, as visitors to the museum will attest, the wheel&#39;s beauty and historic significance create a new mission, which justifies putting it on display here. American Merchant Marine Museum, US Merchant Marine Academy, Kings Point NY 11024; 516 773-5515

The original double wheel of USS Constitution is on display at the American Merchant Marine Museum.