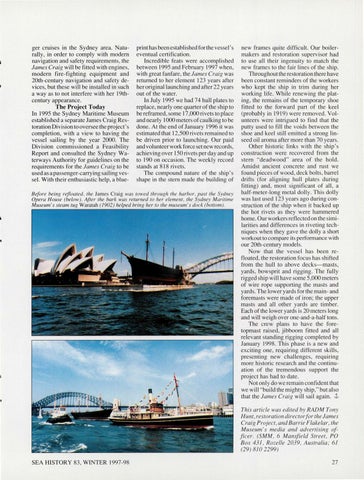 ger cruises in the Sydney area. Naturally, in order to comply with modern navigation and safety req uirements, the James Craig will be fitted with engines, modern fire-fighting equipment and 20th-century navigation and safety devices, but these will be installed in such a way as to not interfere with her 19thcentury appearance.

The Project Today In 1995 the Sydney Maritime Museum establi shed a separate James Craig Restoration Division to oversee the project's completion, with a view to hav ing the vessel sailing by the year 2000. The Division commissioned a Feasibility Report and consulted the Sydney Waterways Authority for guide lines on the requirements for the James Craig to be used as a passenger-carrying sailing vessel. With their enthusiastic help, a blue-

print has been established for the vessel's eventual certification. Incredible feats were accomplished between 1995 and February 1997 when, with great fanfare, the James Craig was returned to her element 123 years after her original launching and after 22 years out of the water. In July 1995 we had 74 hull plates to replace, nearly one quarter of the ship to be reframed, some 17,000 rivets to place and nearly 1000 meters of caulking to be done. At the end of January 1996 it was estimated that 12,500 rivets remained to be driven prior to launching. Our paid and volunteer work force set new records , achieving over 150 rivets per day and up to 190 on occasion. The weekly record stands at 818 rivets. The compound nature of the ship's shape in the stern made the building of

Before being refloated, the James Craig was towed through the harbor, pasr the Sydney Opera House (below). After the bark was returned to her element, the Sydney Maritime Museum' s steam tug Waratah ( 1902) helped bring her to the museum' s dock (bottom).

new frames quite difficult. Our boilermakers and restoration supervi sor had to use all their ingenuity to match the new frames to the fair lines of the ship. Throughout the restoration there have been constant reminders of the workers who kept the ship in trim during her working life. While renewing the plating, the remains of the temporary shoe fitted to the forward part of the keel (probably in 1919) were removed. Volunteers were intri gued to find that the putty used to fill the voids between the shoe and keel still emitted a strong linseed oil aroma after more than 70 years. Other historic links with the ship 's construction were recovered from the stern "deadwood" area of the hold. Amidst ancient concrete and rust we found pieces of wood, deck bolts, barrel drifts (for aligning hull plates during fitting) and, most significant of all, a half-meter-long metal dolly. This dolly was last used 123 years ago during construction of the ship when it backed up the hot rivets as they were hammered home. Our workers reflected on the similarities and differences in riveting techniques when they gave the dolly a short workout to compare its performance with our 20th-century models. Now that the vessel has been refloated, the restoration focus has shifted from the hull to above decks-masts, yards, bowsprit and rigging. The fully rigged ship will have some 5,000 meters of wire rope supporting the masts and yards. The lower yards for the main- and foremasts were made of iron; the upper masts and all other yards are timber. Each of the lower yards is 20 meters long and will weigh over one-and-a-half tons. The crew plans to have the foretopmast raised, jibboom fitted and all relevant standing rigging completed by January 1998. This phase is a new and exciting one, requiring different ski ll s, presenting new challenges, requiring more historic research and the continuation of the tremendous support the project has had to date. Not only do we remain confident that we will "build the mighty ship," but also that the James Craig will sail again . .t