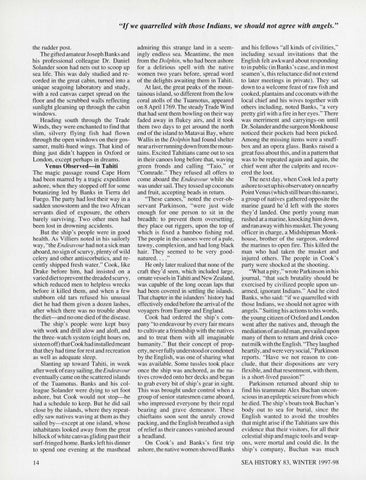 "If we quarrelled with those Indians, we should not agree with angels." the rudder post. The gifted amateur Joseph Banks and his professional colleague Dr. Daniel Solander soon had nets out to scoop up sea life. This was duly studied and recorded in the great cabin, turned into a unique seagoing laboratory and study, with a red canvas carpet spread on the floor and the scrubbed walls reflecting sunlight gleaming up through the cabin windows. Heading south through the Trade Winds, they were enchanted to find that slim, silvery flying fish had flown through the open windows on their gossamer, multi-hued wings . That kind of thing just didn ' t happen in Oxford or London, except perhaps in dreams.

Venus Observed-in Tahiti The magic passage round Cape Hom had been marred by a tragic expedition ashore, when they stopped off for some botanizing led by Banks in Tierra del Fuego. The party had lost their way in a sudden snowstorm and the two African servants died of exposure, the others barely surviving. Two other men had been lost in drowning accidents. But the ship's people were in good health . As Villiers noted in his sailorly way, " the Endeavour had not a sick man aboard, no sign of scurvy, plenty of wild celery and other antiscorbutics, and recently shipped fresh water." Cook, like Drake before him, had insisted on a varied diet to prevent the dreaded scurvy, which reduced men to helpless wrecks before it killed them, and when a few stubborn old tars refused his unusual diet he had them given a dozen lashes, after which there was no trouble about the diet-and no one died of the disease. The ship's people were kept busy with work and drill alow and aloft, and the three-watch system (eight hours on, sixteen off) that Cook had installed meant that they had time for rest and recreation as well as adequate sleep. Slanting up toward Tahiti , in week after week of easy sailing, the Endeavour eventually came on the scattered islands of the Tuamotus. Banks and his colleague Solander were dying to set foot ashore, but Cook would not stop-he had a schedule to keep. But he did sail close by the islands, where they repeatedly saw natives waving at them as they sailed by--except at one island, whose inhabitants looked away from the great hillock of white canvas gliding past their surf-fringed home. Banks left his dinner to spend one evening at the masthead 14

admiring this strange land in a seemingly endless sea. Meantime, the men from the Dolphin, who had been ashore for a delirious spell with the native women two years before, spread word of the delights awaiting them in Tahiti. At last, the great peaks of the mountainous island, so different from the low coral atolls of the Tuamotus, appeared on 8 April 1769. The steady Trade Wind that had sent them bowling on their way faded away in flukey airs, and it took them two days to get around the north end of the island to Matavai Bay, where Wallis in the Dolphin had found shelter near ariverrunning down from the mountains. Excited Tahitians came out to sea in their canoes long before that, waving green fronds and calling "Taio," or "Comrade." They refused all offers to come aboard the Endeavour while she was under sail. They tossed up coconuts and fruit, accepting beads in return. "These canoes," noted the ever-observant Parkinson, "were just wide enough for one person to sit in the breadth: to prevent them oversetting, they place out riggers, upon the top of which is fixed a bamboo fishing rod. The people in the canoes were of a pale, tawny , complexion , and had long black hair. They seemed to be very goodnatured .... " He only later realized that none of the craft they'd seen, which included large, ornate vessels in Tahiti and New Zealand, was capable of the long ocean laps that had been covered in settling the islands. That chapter in the islanders' history had effectively ended before the arrival of the voyagers from Europe and England. Cook had ordered the ship ' s company "to endeavour by every fair means to cultivate a friendship with the natives and to treat them with all imaginable humanity." But their concept of property, never fully understood or condoned by the English, was one of sharing what was available. Some tussles took place once the ship was anchored, as the natives crowded onto her decks and began to grab every bit of ship's gear in sight. This was brought under control when a group of senior statesmen came aboard, who impressed everyone by their regal bearing and grave demeanor. These chieftains soon sent the unruly crowd packing, and the English breathed a sigh of relief as their canoes vani shed around a headland. On Cook's and Banks 's first trip ashore, the native women showed Banks

and his fellows "all kinds of civilities," including sexual invitations that the English felt awkward about responding to in public (in Banks ' s case, and in most seamen 's, this reluctance did not extend to later meetings in private). They sat down to a welcome feast of raw fish and cooked, plantains and coconuts with the local chief and his wives together with others including, noted Banks, "a very pretty girl with a fire in her eyes." There was merriment and carryings-on until Dr. Solander and the surgeon Monkhouse noticed their pockets had been picked. Among the missing items were a snuffbox and an opera glass. Banks raised a great fuss about this, and in a pattern that was to be repeated again and again , the chief went after the culprits and recovered the loot. The next day , when Cook led a party ashore to set up his observatory on nearby Point Venus (which still bears this name), a group of natives gathered opposite the marine guard he ' d left with the stores they ' d landed. One portly young man rushed at a marine, knocking him down , and ran away with his musket. The young officer in charge, a Midshipman Monkhouse, brother of the surgeon, ordered the marines to open fire. This killed the man who had taken the musket and injured others. The people in Cook's party were shocked at the shooting. "What a pity," wrote Parkinson in his journal, "that such brutality should be exercised by civilized people upon unarmed, ignorant Indians." And he cited Banks, who said: " if we quarrelled with those Indians, we should not agree with angels." Suiting his actions to his words, the young citizen of Oxford and London went after the natives and, through the mediation of an old man , prevailed upon many of them to return and drink coconut milk with the English. "They laughed heartily,and were very social," Parkinson reports. "Have we not reason to conclude, that their dispositions are very flexible , and that resentment, with them , is a short-lived passion?" Parkinson returned aboard ship to find his teammate Alex Buchan unconscious in an epileptic seizure from which he died. The ship 's boats took Buchan's body out to sea for burial, since the English wanted to avoid the troubles that might arise if the Tahitians saw this evidence that their visitors, for all their celestial ship and magic tools and weapons , were mortal and could die. In the ship ' s company, Buchan was much SEA HISTORY 83 , WINTER 1997-98