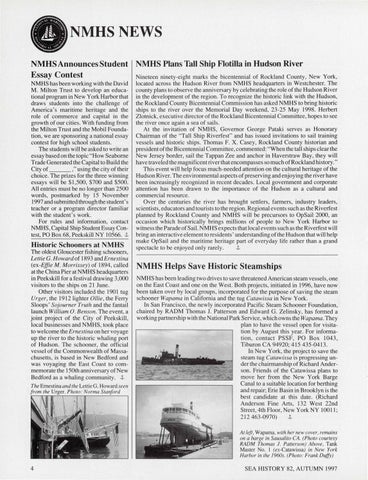 .NMHSNEWS NMHS Announces Student NMHS Plans Tall Ship Flotilla in Hudson River Essay Contest Nineteen ninety-eight marks the bicentennial of Rockland County, NMHS has been working with the David M. Milton Trust to develop an educational program in New York Harbor that draws students into the challenge of America's maritime heritage and the role of commerce and capital in the growth of our cities. With funding from the Milton Trust and the Mobil Foundation, we are sponsoring a national essay contest for high school students. The students will be asked to write an essay based on the topic "How Seaborne Trade Generated the Capital to Build the ," using the city of their City of choice. The prizes for the three winning essays will be $1,500, $700 and $500. All entries must be no longer than 2500 words, postmarked by 15 November 1997 and submitted through the student's teacher or a program director familiar with the student's work. For rules and information, contact NMHS , Capital Ship Student Essay Contest, PO Box 68, Peekskill NY 10566. ,t

Historic Schooners at NMHS The oldest Gloucester fishing schooners, Lettie G. Howard of 1893 and Ernestina (ex-Effie M. Morrissey) of 1894, called at the China Pier at NMHS headquarters in Peekskill for a festival drawing 3,000 visitors to the ships on 21 June. Other visitors included the 1901 tug Urger, the 1912 lighter Ollie, the Ferry Sloops ' Sojourner Truth and the fantail launch William 0. Benson. The event, a joint project of the City of Peekski ll, local businesses and NMHS, took place to welcome the Ernestina on her voyage up the river to the historic whaling port of Hudson. The schooner, the official vessel of the Commonwealth of Massachusetts, is based in New Bedford and was voyaging the East Coast to commemorate the 150th anniversary of New Bedford as a whaling community. ,t

New York, located across the Hudson River from NMHS headquarters in Westchester. The county plans to observe the anniversary by celebrating the role of the Hudson River in the development of the region. To recognize the historic link with the Hudson , the Rockland County Bicentennial Commission has asked NMHS to bring historic ships to the river over the Memorial Day weekend, 23-25 May 1998. Herbert Zlotnick, executive director of the Rockland Bicentennial Committee, hopes to see the river once again a sea of sails. At the invitation of NMHS, Governor George Pataki serves as Honorary Chairman of the "Tall Ship Riverfest" and has issued invitations to sail training vessels and historic ships. Thomas F. X. Casey, Rockland County historian and president of the Bicentennial Committee, commented: "When the tall ships clear the New Jersey border, sail the Tappan Zee and anchor in Haverstraw Bay, they will have traveled the magnificent river that encompasses so much of Rockland history." This event will help focus much-needed attention on the cultural heritage of the Hudson River. The environmental aspects of preserving and enjoying the river have been increasingly recognized in recent decades. Local government and corporate attention has been drawn to the importance of the Hudson as a cultural and commercial resource. Over the centuries the river has brought settlers, farmers, industry leaders, scientists, educators and tourists to the region. Regional events such as the Riverfest planned by Rockland County and NMHS will be precursors to OpSail 2000, an occasion which historically brings millions of people to New York Harbor to witness the Parade of Sail. NMHS expects that local events such as the Riverfest will bring an interactive element to residents' understanding of the Hudson that will help make OpSail and the maritime heritage part of everyday life rather than a grand ,t spectacle to be enjoyed only rarely.

NMHS Helps Save Historic Steamships NMHS has been leadi ng two drives to save threatened American steam vessels, one on the East Coast and one on the West. Both projects, initiated in 1996, have now been taken over by local groups, incorporated for the purpose of saving the steam schooner Wapama in California and the tug Catawissa in New York. In San Francisco, the newly incorporated Pacific Steam Schooner Foundation, chaired by RADM Thomas J. Patterson and Edward G. Zelinsky, has formed a working partnership with the National Park Service, which owns the Wapama. They plan to have the vessel open for visitation by August this year. For information , contact PSSF, PO Box 1043 , Tiburon CA 94920; 415 435-0413. In New York, the project to save the steam tug Catawissa is progressing under the chairmanship of Richard Anderson. Friends of the Catawissa plans to move her from the New York Barge Canal to a suitable location for berthing and repair; Erie Basin in Brooklyn is the best candidate at this date. (Richard Anderson Fine Arts, 132 West 22nd Street, 4th Floor, New York NY 10011 ; 212 463-0970) ,t At left, Wapama, with her new cover, remains on a barge in Sausalito CA. (Photo courtesy RADM Thomas J. Patterson) Above, Tank Master No. I (ex-Catawissa) in New York Harbor in the 1960s. (Photo: Frank Duffy)