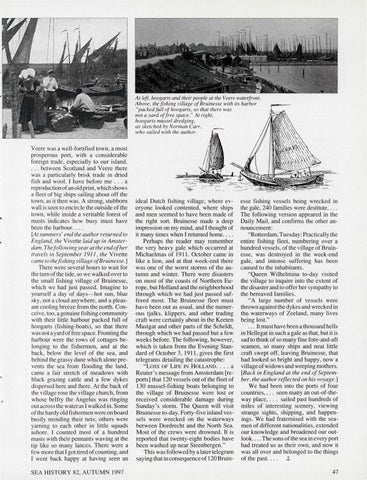 At left, hoogarts and their people at the Veere waterfront. Above, the fishing village of Bruinesse with its harbor "packed full of hoogarts, so that there was not a yard offree space." At right, hoogarts mussel dredging, as sketched by Norman Carr, who sailed with the author.

Yeere was a well-fortified town, a most prosperous port, with a considerable forei gn trade, especially to our island . . . . between Scotland and Veere there was a particularly bri sk trade in dried fi sh and wool. I have before me . .. a reproduction of an old print, which shows a fl eet of big ships sailing about off the town, as it then was. A strong, stubborn wall is seen to encircle the outside of the town, while inside a veritable forest of masts indicates how busy must have been the harbour. ... [At summers' end the author returned to England, the Vivette laid up in Amsterdam. The followin g year at the end ofher travels in September 1911 , the Vivette came to the fishing village ofBruinesse.] There were several hours to wait for the turn of the tide, so we walked over to the small fi shing village of Bruinesse, which we had just passed. Imagine to yourself a day of days- hot sun, blue sky , not a cloud anywhere, and a pleasant cooling breeze from the north. Conceive, too, a genuine fishing community with their little harbour packed full of hoogarts (fishing-boats) , so that there was not a yard of free space. Fronting the harbour were the rows of cottages belonging to the fishermen, and at the back, below the level of the sea, and behind the grassy dune which alone pre: vents the sea from flooding the land , came a fair stretch of meadows with bl ack grazing cattle and a few dykes di spersed here and there. At the back of the village rose the village church, from whose belfry the Angelus was ringing out across the water as I walked in. Some of the hardy old fi shermen were on board bu sil y mending their nets; others were yarning to each other in little squads ashore. I counted most of a hundred masts with their pennants waving at the tip like so many lances. There were a few more that I got tired of counting, and I went back happy at having seen an SEA HISTORY 82, AUTUMN 1997

ideal Dutch fi shing village, where everyone looked contented, where ships and men seemed to have been made of the right sort. Bruinesse made a deep impression on my mind, and I thought of it many times when I returned home . .. . Perhaps the reader may remember the very heavy gale which occurred at Michaelmas of 1911. October came in like a lion, and at that week-end there was one of the worst storms of the autumn and winter. There were disasters on most of the coasts of Northern Europe, but Holland and the neighborhood through which we had just passed suffered most. The Bruinesse fleet must have been out as usual, and the numerous tjalks, klippers, and other trading craft were certainly about in the Keeten Mastgat and other parts of the Scheidt, through which we had passed but a few weeks before. The following, however, which is taken from the Evening Standard of October 3, 1911, gives the first telegrams detailing the catastrophe: "Loss OF LIFE IN HOLLAND . . . . a Reuter' s message from Amsterdam [reports] that 120 vessels out of the fleet of 130 mussel-fishing boats belonging to the village of Bruinesse were lost or received considerable damage during Sunday ' s storm. The Queen will visit Bruinesse to-day . Forty-five inland vessels were wrecked on the waterways between Dordrecht and the North Sea. Most of the crews were drowned. It is reported that twenty-eight bodies have been washed up near Steenbergen." This was followed by a later telegram saying that in consequence of 120 Bruin-

esse fishing vessel s being wrecked in the gale, 240 families were destitute. . . . The following version appeared in the Daily Mail , and confirms the other announcement: "Rotterdam, Tuesday: Practically the entire fishing fleet, numbering over a hundred vessel s, of the village ofBruinesse, was destroyed in the week-end gale, and intense suffering has been caused to the inhabitants. "Queen Wilhelmina to-day visited the village to inquire into the extent of the disaster and to offer her sympathy to the bereaved families. "A large number of vessels were thrown against the dykes and wrecked in the .waterways of Zeeland, many lives being lost." ... It must have been a thousand hells in Hellegat in such a gale as that, but it is sad to think of so many fine fore-and-aft seamen, so many ships and neat little craft swept off, leaving Bruinesse, that had looked so bright and happy, now a village of widows and weeping mothers. [Back in England at the end of September, the author reflected on his voyage .] We had been into the ports of four countries, . . . seen many an out-of-theway place, . . . sailed past hundreds of miles of interesting scenery, viewing strange sights, shipping, and happenings. We had fraternised with the seamen of different nationalities, extended our knowledge and broadened our outlook . .. . The sons of the sea in every port had treated us as their own, and now it was all over and belonged to the things of the past. . . . ,t