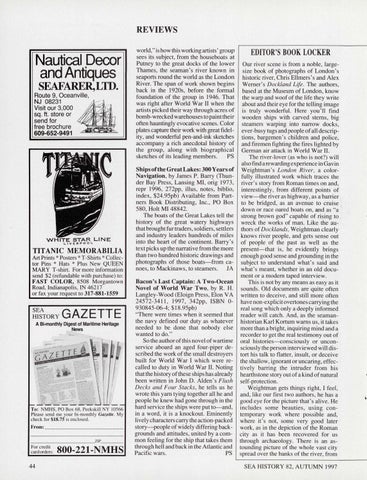 world," is how this working artists' group sees its subject, from the houseboats at Putney to the great docks of the lower Thames, the seaman's river known in seaports round the world as the London River. The span of work shown begins back in the 1920s, before the formal foundation of the group in 1946. That was right after World War II when the artists picked their way through acres of bomb-wrecked warehouses to paint their often hauntingly evocative scenes. Color plates capture their work with great fidelity, and wonderful pen-and-ink sketches accompany a rich anecdotal history of the group, along with biographical sketches of its leading members. PS

Our river scene is from a noble, largesize book of photographs of London 's historic river, Chris Ellmers's and Alex Werner's Dockland Life. The authors, based at the Museum of London , know the warp and woof of the life they write about and their eye for the telling image is truly wonderful. Here you 'II find wooden ships with carved stems, big steamers warping into narrow docks, ever-busy tugs and people of all descriptions , bargemen 's children and police, and firemen fighting the fires lighted by German air attack in World War IL The river-lover (as who is not?) will also find a rewarding experience in Gavin Ships of the Great Lakes: 300 Years of Weightman 's London River, a colorNavigation, by James P. Barry (Thun- fully illustrated work which traces the der Bay Press, Lansing Ml, orig 1973, river's story from Roman times on and, repr 1996, 272pp, illus, notes, biblio, interestingly, from different points of index, $24.95pb) Available from Part- view-the river as highway, as a barrier ners Book Distributing, Inc., PO Box to be bridged, as an avenue to cruise 580, Holt MI 48842. down or race oared boats on, and as "a The boats of the Great Lakes tell the strong brown god" capable of rising to history of the great watery highways wreck the works of man. Like the authat brought fur traders, soldiers, settlers thors of Docklands, Weightman clearly and industry leaders hundreds of miles knows river people, and gets sense out into the heart of the continent. Barry's of people of the past as well as the text picks up the narrative from the more present-that is, he evidently brings than two hundred historic drawings and enough good sense and grounding in the photographs of those boats-from ca- subject to understand what's said and noes , to Mackinaws, to steamers. JA what's meant, whether in an old document or a modem taped interview. Bacon's Last Captain: A Two-Ocean This is not by any means as easy as it Novel of World War Two, by R. H. sounds. Old documents are quite often Langley-Wood (Eloign Press, Elon VA written to deceive, and still more often 24572-3411, 1997, 342pp, ISBN 0- have non-explicit overtones carrying the 930845-06-4; $18.95pb) real song which only a deeply informed "There were times when it seemed that reader will catch. And, as the seamanthe navy defined our duty as whatever historian Karl Kortum warns us, it takes needed to be done that nobody e lse more than a bright, inquiring mind and a wanted to do." recorder to get the real testimony out of So the author of this novel of wartime oral histories--consciously or unconservice aboard an aged four-piper de- sciously the person interviewed will disscribed the work of the small destroyers tort his talk to flatter, insult, or deceive built for World War I which were re- the shallow, ignorant or uncaring, effeccalled to duty in World War II. Noting tively barring the intruder from his that the history of these ships has already hearthstone story out of a kind of natural been written in John D. Alden's Flush self-protection . Decks and Four Stacks, he tells us he Weightman gets things right, I feel , wrote this yam tying together all he and and, like our first two authors, he has a people he knew had gone through in the good eye for the picture that's alive. He hard service the ships were put to--and, includes some beauties , using conin a word, it is a knockout. Eminently temporary work where possible and, lively characters carry the action-packed where it's not, some very good later story-people of wide! y differing back- work, as in the depiction of the Roman grounds and attitudes, united by a com- city as it has been recovered for us mon feeling for the ship that takes them through archaeology. There is an asthrough hell and back in the Atlantic and tounding picture of the whole vast city Pacific wars. PS spread over the banks of the river, from SEA HISTORY 82, AUTUMN 1997