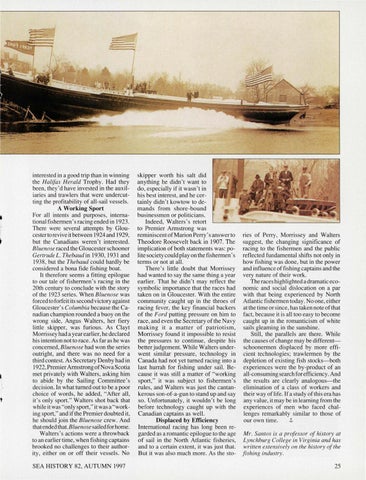 interested in a good trip than in winning the Halifax Herald Trophy. Had they been, they'd have invested in the auxiliaries and trawlers that were undercutting the profitability of all-sail vessels. A Working Sport For all intents and purposes, international fishermen's racing ended in 1923. There were several attempts by Gloucesterto revive it between 1924 and 1929, but the Canadians weren't interested. Bluenose raced the Gloucester schooner Gertrude L. Thebaud in 1930, 1931 and 1938, but the Thebaud could hardly be considered a bona fide fishing boat. It therefore seems a fitting epilogue to our tale of fishermen's racing in the 20th century to conclude with the story of the 1923 series. When Bluenose was forced to forfeit its second victory against Gloucester' s Columbia because the Canadian champion rounded a buoy on the wrong side, Angus Walters, her fiery little skipper, was furious. As Clayt Morrissey had a year earlier, he declared his intention not to race. As far as he was concerned, Bluenose had won the series outright, and there was no need for a third contest. As Secretary Denby had in 1922, Premier Armstrong of Nova Scotia met privately with Walters, asking him to abide by the Sailing Committee's decision. In what turned out to be a poor choice of words, he added, "After all, it's only sport." Walters shot back that while it was "only sport," it was a "working sport," and if the Premier doubted it, he should join the Bluenose crew. And thatended that. Bluenose sailed for home. Walters's actions were a throwback to an earlier time, when fishing captains brooked no challenges to their authority, either on or off their vessels. No SEA HISTORY 82, AUTUMN 1997

skipper worth his salt did anything he didn't want to do, especially if it wasn't in his best interest, and he certainly didn ' t kowtow to demands from shore-bound businessmen or politicians . Indeed, Walters 's retort to Premier Armstrong was reminiscent of Marion Perry's answer to Theodore Roo.sevelt back in 1907. The implication of both statements was: polite society could play on the fishermen's terms or not at all. There's little doubt that Morrissey had wanted to say the same thing a year earlier. That he didn 't may reflect the symbolic importance that the races had taken on in Gloucester. With the entire community caught up in the throes of racing fever, the key financial backers of the Ford putting pressure on him to race, and even the Secretary of the Navy making it a matter of patriotism, Morrissey found it impossible to resist the pressures to continue, despite his better judgement. While Walters underwent similar pressure, technology in Canada had not yet turned racing into a last hurrah for fishing under sail. Because it was still a matter of "working sport," it was subject to fishermen's rules, and Walters was just the cantankerous son-of-a-gun to stand up and say so. Unfortunately, it wouldn't be long before technology caught up with the Canadian captains as well. Displaced by Efficiency International racing has long been regarded as a romantic epilogue to the age of sail in the North Atlantic fisheries , and to a certain extent, it was just that. But it was also much more. As the sto-

ries of Perry, Morrissey and Walters suggest, the changing significance of racing to the fishermen and the public reflected fundamental shifts not only in how fishing was done, but in the power and influence of fishing captains and the very nature of their work. The races highlighted a dramatic economic and social dislocation on a par with that being experienced by North Atlantic fishermen today. No one, either at the time or since, has taken note of that fact, because it is all too easy to become caught up in the romanticism of white sails gleaming in the sunshine. Still, the parallels are there. While the causes of change may be differentschoonermen displaced by more efficient technologies; trawlermen by the depletion of existing fish stocks-both experiences were the by-product of an all-consuming search for efficiency. And the results are clearly analogous-the elimination of a class of workers and their way oflife. If a study of this era has any value, it may be in learning from the experiences of men who faced challenges remarkably similar to those of our own time. .t

Mr. Santos is a professor of history at Lynchburg College in Virginia and has written extensively on the history of the fishing industry. 25