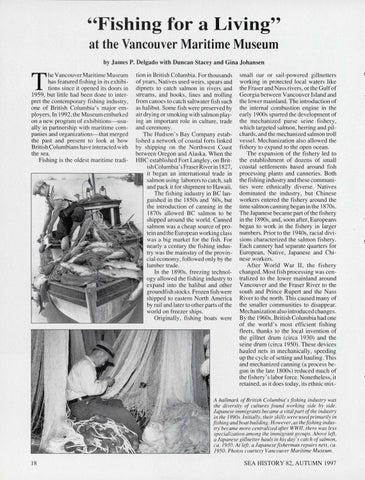 ''Fishing for a Living'' at the Vancouver Maritime Museum by James P. Delgado with Duncan Stacey and Gina Johansen he Vancouver Maritime Museum has featured fishing in its exhibitions since it opened its doors in 1959, but little had been done to interpret the contemporary fishing industry , one of British Columbia 's major employers. In 1992, the Museum embarked on a new program of exhibitions-usually in partnership with maritime companies and organizations-that merged the past and present to look at 'how British Columbians have interacted with the sea. Fishing is the oldest maritime tradi-

tion in British Columbia. For thousands of years, Natives used weirs, spears and dipnets to catch salmon in rivers and streams, and hooks, lines and trolling from canoes to catch saltwater fish such as halibut. Some fish were preserved by air drying or smoking with salmon playing an important role in culture, trade and ceremony. The Hudson 's Bay Company established a network of coastal forts linked by shipping on the Northwest Coast between Oregon and Alaska. When the HBC established Fort Langley, on British Columbia's Fraser River in 1827, it began an international trade in salmon using laborers to catch, salt and pack it for shipment to Hawaii. The fishing industry in BC languished in the 1850s and '60s, but the introduction of canning in the 1870s allowed BC salmon to be shipped around the world. Canned salmon was a cheap source of protein and the European working class was a big market for the fish. For nearly a century the fishing industry was the mainstay of the provincial economy , followed only by the lumber trade. In the 1890s, freezing technology allowed the fishing industry to expand into the halibut and other groundfish stocks. Frozen fish were shipped to eastern North America by rail and later to other parts of the world on freezer ships. Originally, fishing boats were

small oar or sail-powered gillnetters working in protected local waters like the Fraser and Nass rivers, or the Gulf of Georgia between Vancouver Island and the lower mainland. The introduction of the internal combustion engine in the early 1900s spurred the development of the mechanized purse seine fishery, which targeted salmon, herring and pilchards, and the mechanized salmon troll vessel. Mechanization also allowed the fishery to expand to the open ocean. The expansion of the fishery led to the establishment of dozens of small coastal settlements based around fish processing plants and canneries. Both the fishing industry and these communities were ethnically diverse. Natives dominated the industry , but Chinese workers entered the fishery around the time salmon canning began in the 1870s. The Japanese became part of the fishery in the 1890s, and, soon after, Europeans began to work in the fishery in larger numbers. Prior to the 1940s, racial divisions characterized the salmon fishery. Each cannery had separate quarters for European , Native, Japanese and Chinese workers. After World War II, the fishery changed. Most fish processing was centralized to the lower mainland around Vancouver and the Fraser River to the south and Prince Rupert and the Nass River to the north. This caused many of the smaller communities to disappear. Mechanization also introduced changes. By the 1960s, British Columbia had one of the world 's most efficient fishing fleets , thanks to the local invention of the gill net drum (circa 1930) and the seine drum (circa 1950). These devices hauled nets in mechanically, speeding up the cycle of setting and hauling. This and mechanized canning (a process begun in the late 1800s) reduced much of the fishery's labor force. Nonetheless, it retained, as it does today, its ethnic mix-

A hallmark of British Columbia' s fishing industry was the diversity of cultures found working side by side. Japanese immigrants became a vital part of the industry in the 1890s. Initially , their skills were used primarily in fishing and boat building. However, as the fishing industry became more centralized after WWII , there was less specialization among the immigrant groups. Above left, a Japanese gillnetter hauls in his day's catch of salmon, ca. 1930. At left, a Japanese fisherman repairs nets , ca. 1950. Photos courtesy Vancouver Maritime Museum.