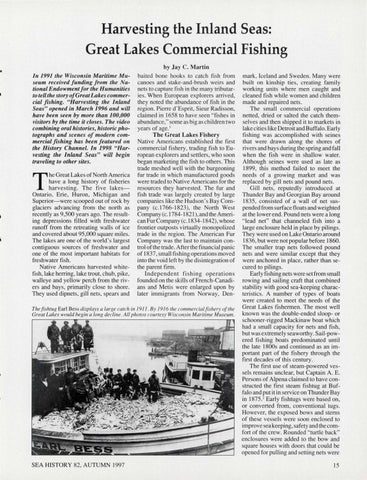 he Great Lakes of North America have a long history of fisheries harvesting. The five lakesOntario, Erie, Huron , Michigan and Superior-were scooped out of rock by glaciers advancing from the north as recently as 9,500 years ago. The resulting depressions filled with freshwater runoff from the retreating walls of ice and covered about 95 ,000 square miles. The lakes are one of the world's largest contiguous sources of freshwater and one of the most important habitats for freshwater fish. Native Americans harvested whitefi sh, lake herring, lake trout, chub, pike, walleye and yellow perch from the rivers and bays, primarily close to shore. They used dipnets, gill nets, spears and

by Jay C. Martin baited bone hooks to catch fish from canoes and stake-and-brush weirs and nets to capture fish in the many tributaries. When European explorers arrived, they noted the abundance of fish in the region. Pierre d 'Esprit, Sieur Radisson, claimed in 1658 to have seen "fishes in abundance," some as big as children two years of age.' The Great Lakes Fishery Native Americans establi shed the first commercial fishery, trading fish to European explorers and settlers, who soon began marketing the fish to others. This trade meshed well with the burgeoning fur trade in which manufactured goods were traded to Native Americans for the resources they harvested. The fur and fish trade was largely created by large companies like the Hudson's Bay Company (c.1766-1823), the North West Company (c. 1784-1821 ), and the American Fur Company (c.1834-1842), whose frontier outposts virtually monopolized trade in the region. The American Fur Company was the last to maintain control of the trade. After the financial panic of 1837, small fishing operations moved into the void left by the di sintegration of the parent firm. Independent fishing operations founded on the skills of French-Canadians and Metis were enlarged upon by later immigrants from Norway, Den-

Thefishtug Earl Bess displays a large catch in 1911 . By 1916 the commercial fishery of the Great Lakes would begin a long decline . All photos courtesy Wisconsin Maritime Museum.

mark, Iceland and Sweden. Many were built on kinship ties, creating family working units where men caught and cleaned fish while women and children made and repaired nets. The small commercial operations netted, dried or salted the catch themselves and then shipped it to markets in lake cities like Detroit and Buffalo. Early fishing was accomplished with seines that were drawn along the shores of rivers and bays during the spring and fall when the fish were in shallow water. Although seines were used as late as 1899, this method failed to meet the needs of a growing market and was replaced by gill nets and pound nets. Gill nets, reputedly introduced at Thunder Bay and Georgian Bay around 1835, consisted of a wall of net suspended from surface floats and weighted at the lower end. Pound nets were a long "lead net" that channeled fish into a large enclosure held in place by pilings. They were used on Lake Ontario around 1836, but were not popular before 1860. The smaller trap nets followed pound nets and were similar except that they were anchored in place, rather than secured to pilings. Early fishing nets were set from small rowing and sailing craft that combined stability with good sea-keeping characteristics. A number of types of boats were created to meet the needs of the Great Lakes fishermen. The most well known was the double-ended sloop- or schooner-rigged Mackinaw boat which had a small capacity for nets and fish, but was extremely seaworthy. Sail-powered fishing boats predominated until the late 1800s and continued as an important part of the fishery through the first decades of this century. The first use of steam-powered vessels remains unclear, but Captain A. E. Persons of Alpena claimed to have constructed the first steam fishtug at Buffalo and put it in service on Thunder Bay in 1875. 2 Early fishtugs were based on, or converted from, conventional tugs. However, the exposed bows and stems of these vessels were soon enclosed to improve sea keeping, safety and the comfort of the crew. Rounded "turtle back" enclosures were added to the bow and square houses with doors that could be opened for pulling and setting nets were 15