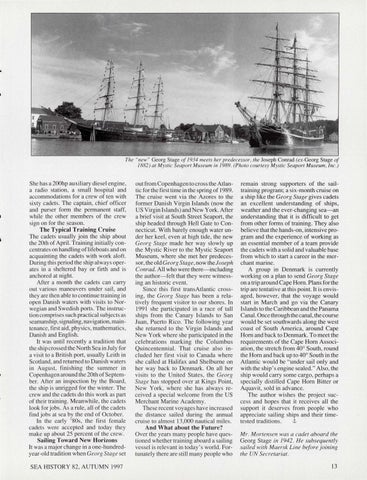 She has a 200hp auxiliary diesel engine, a radio station, a small hospital and accommodations for a crew of ten with sixty cadets. The captain, chief officer and purser form the permanent staff, while the other members of the crew sign on for the season.

The Typical Training Cruise The cadets usually join the ship about the 20th of April. Training initially concentrates on handling oflifeboats and on acquainting the cadets with work aloft. During this period the ship always operates in a sheltered bay or firth and is anchored at night. After a month the cadets can carry out various maneuvers under sail, and they are then able to continue training in open Danish waters with visits to Norwegian and Swedish ports. The instruction comprises such practical subjects as seamanship, signaling, navigation , maintenance, first aid, physics, mathematics, Danish and English. It was until recently a tradition that the ship crossed the North Sea in July for a visit to a British port, usually Leith in Scotland, and returned to Danish waters in August, finishing the summer in Copenhagen around the 20th of September. After an inspection by the Board, the ship is unrigged for the winter. The crew and the cadets do this work as part of their training. Meanwhile, the cadets look for jobs. As a rule, all of the cadets find jobs at sea by the end of October. In the early '80s, the first female cadets were accepted and today they make up about 25 percent of the crew.

out from Copenhagen to cross the Atlantic for the first time in the spring of 1989. The cruise went via the Azores to the former Danish Virgin Islands (now the US Virgin Islands) and New York. After a brief visit at South Street Seaport, the ship headed through Hell Gate to Connecticut. With barely enough water under her keel, even at high tide, the new Georg Stage made her way slowly up the Mystic River to the Mystic Seaport Museum, where she met her predecessor, the old Georg Stage, now the Joseph Conrad. All who were there-including the author-felt that they were witnessing an historic event. Since this first transAtlantic crossing, the Georg Stage has been a relatively frequent visitor to our shores. In 1991 she participated in a race of tall ships from the Canary Islands to San Juan, Puerto Rico. The following year she returned to the Virgin Islands and New York where she participated in the celebrations marking the Columbus Quincentennial. That cruise also included her first visit to Canada where she called at Halifax and Shelburne on her way back to Denmark. On all her visits to the United States, the Georg Stage has stopped over at Kings Point, New York, where she has always received a special welcome from the US Merchant Marine Academy. Theserecentvoyages haveincreased the distance sailed during the annual cruise to almost 13,000 nautical miles.

remain strong supporters of the sailtraining program; a six-month cruise on a ship like the Georg Stage gives cadets an excellent understanding of ships, weather and the ever-changing sea-an understanding that it is difficult to get from other forms of training. They also believe that the hands-on, intensive program and the experience of working as an essential member of a team provide the cadets with a solid and valuable base from which to start a career in the merchant marine. A group in Denmark is currently working on a plan to send Georg Stage on a trip around Cape Hom. Plans forthe trip are tentative at this point. It is envisaged, however, that the voyage would start in March and go via the Canary Islands to the Caribbean and the Panama Canal. Once through the canal, the course would be set southwards along the west coast of South America, around Cape Hom and back to Denmark. To meet the requirements of the Cape Hom Association, the stretch from 40Â° South, round the Hom and back up to 40Â° South in the Atlantic would be " under sail only and with the ship's engine sealed." Also, the ship would carry some cargo, perhaps a specially distilled Cape Hom Bitter or Aquavit, sold in advance. The author wishes the project success and hopes that it receives all the support it deserves from people who appreciate sailing ships and their timetested traditions. !.

And What about the Future? Over the years many people have questioned whether training aboard a sailing vessel is relevant in today's world. Fortunately there are still many people who

Mr. Mortensen was a cadet aboard the Georg Stage in 1942 . He subsequently sailed with Maersk Line before joining the UN Secretariat. 13