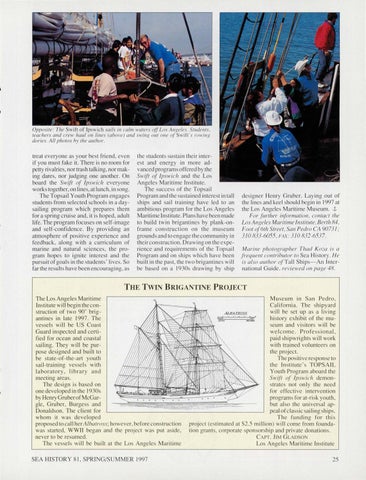 Opposite: The Swift of Ipsw ich sails in calm waters off Los Angeles. Students . teachers and crew haul on lines (ahmâ&#x20AC;˘e) and swing out one of Swift' s rowing dories. All photos by the author.

treat everyo ne as yo ur best fri e nd , even if yo u must fake it. There is no room for petty rivalries, nor trash talking, nor making dares, nor judging one another. On board the Swift of Ipswich everyone works together, on lines, at lunch, in song. The Topsai I Youth Program e ngages students from se lected schoo ls in a daysa iling program which prepares them for a spring cruise and , it is hoped, adult life. The program focuses on se lf-image and se lf-confidence. By providing an atmosphe re of pos itive ex pe rie nce and feedback, along with a c urric ulum of marine and natural scie nces, the program hopes to ignite interest and the pursuit of goa ls in the students' li ves. So farthe results ha ve been e ncourag ing, as

the stude nts susta in the ir inte rest and e ne rgy in more advanced programs offered by the Swift of Ipswich and the Los Ange les Maritime Institute. The success of the Topsail Program and the sustained interest in tall ships and sail tra ining have led to an ambitious program for the Los Angeles Maritime Institute. Plans have been made to build twin brigantines by plank-onfram e construction o n th e mu se um gro unds and to engage the comm unity in their construction. Drawing on the experience and requireme nts of the Topsail Program and on ships whic h have been built in the past, the two bri gantines will be based on a 1930s drawing by ship

THE TWIN BRIGANTINE PROJECT The Los Ange les Maritime Institute wi 11 beg in the constructi on of two 90' bri gantines in late 1997. The vesse ls will be US Coast Guard inspected and certi fied for ocean and coastal sailing. They will be purpose des igned and built to be state-of-the-art yo uth sa il-training vessels wi th labora tory , library a nd meeting areas . The des ign is based o n one developed in the 1930s by Henry GruberofMcGargle, Gruber, Burgess and Do naldson. The client for whom it was developed proposed to ca ll he r Albatross; however, before construction was sta rted, WWII began and the project was put aside, never to be resumed . The vessels will be built at the Los Ange les Maritime SEA HISTORY 81 , SPRING/SUMMER 1997