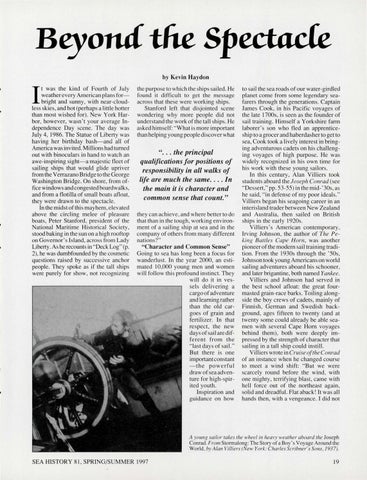 Beyond tlie SP----~~ by Kevin Haydon t was the kind of Fourth of July weather every American plans forbright and sunn y, wi th near-cloudless sk ies, and hot (perhaps a little hotter than most wished for). New York Harbor, however, wasn't yo ur average Independence Day scene. The day was Jul y 4, 1986. The Statue of Liberty was having her birthday . bas h-and all of America was invited. Millions had turned out with binoculars in hand to watch an awe-inspiring sight-a majestic fleet of sailing ships that would g lide upriver from the Verrazano Bridge to the George Washington Bridge. On shore, from office windows and congested boardwalks, and from a flotilla of small boats afloat, they were drawn to the spectacle. In the midst of this mayhem , elevated above the c ircling melee of pleasure boats, Peter Stanford, pres ident of the National Maritime Historical Soc iety , stood baking in the sun on a high rooftop on Governor' s Island, across from Lady Liberty. As he recounts in "Deck Log" (p. 2), he was dumbfounded by the cosmetic questions raised by success ive anchor people. They spoke as if the tall ships were purely for show, not recognizing

the purpose to wh ich the ships sai led. He found it difficult to get the message across that these were work ing ships. Stanford left that disjointed scene wondering why more people did not understand the wo rk of the tall ships. He asked himself: "What is more important than helping young people discover what

" ... the principal qualifications for positions of responsibility in all walks of life are much the same . ... In the main it is character and common sense that count." they can achieve, and where better to do that than in the tough, worki ng environment of a sailing ship at sea and in the company of others from many different nations?"

"Character and Common Sense" Go ing to sea has long been a foc us fo r wanderlust. In the year 2000 , an estimated I 0,000 yo ung men and women will follow this profound instinct. They wi ll do it in vessels delivering a cargo of adventure and learning rather than the old cargoes of grain and fertilizer. In that respect, the new days of sail are different from the " last days of sail. " But there is one important constant - the po we rful draw of sea adventure for hi gh-spirited youth. Inspiration and guidance on how

to sai l the sea roads of our water-girdled planet come from some legendary seafarers through the generations. Captain James Cook, in hi s Pac ific voyages of the late 1700s, is seen as the founder of sail training. Himself a Yorkshire farm laborer ' s son who fl ed an apprenticeship to a grocer and haberdas her to get to sea, Cook took a li vely interest in bringing adventurous cadets on hi s challenging voyages of hi gh purpose. He was widely recogni zed in hi s own time for his work with these yo ung sail ors. In this century, Alan Villiers took students aboard the Joseph Conrad (see "Dessert," pp. 53-55) in the mid- '30s, as he said, " in defense of my poor ideals." Villiers began hi s seagoing career in an interisland trader between New Zealand and Australia, then sa iled on British ships in the earl y l 920s. Villiers's American contemporary, Irving Johnson , the author of The Peking Bau/es Cape Horn, was another pioneerofthe modem sail training tradi tion. From the 1930s through the '50s , Johnson took yo ung Americans on world sailing adventures aboard hi s schooner, and later brigantine, both named Yankee. Villiers and Johnson had served in the best school afloat: the great fourmasted grain-race barks. Toiling alongside the boy crews of cadets, mainly of Finnish, German and Swedish background , ages fifteen to twenty (and at twenty some could already be able seamen with several Cape Hom voyages behind them) , both were deep ly impressed by the strength of character that sai ling in a tall ship could instill. Villiers wrote in Cruise ofthe Conrad of an in stance when he changed course to meet a wind shift: "But we were scarce ly round before the wind , with one mighty , terrifying blast, came with he ll force out of the northeast again , solid and dreadful. Flat aback! It was a ll hands then, with a vengeance. I did not

A young sailor takes the wheel in heavy weather aboard the Joseph Conrad. From Stonnalong: The Story of a Boy's Voyage Around the World, by Alan Villiers (New York: Charles Scribner's Sons , 1937).