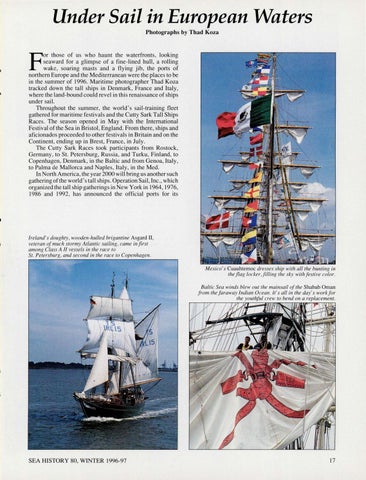 Under Sail in European Waters Photographs by Thad Koza

or those of us who haunt the waterfronts , looking seaward for a glimpse of a fine-lined hull , a rolling wake, soaring masts and a flying jib, the ports of northern Europe and the Mediterranean were the places to be in the summer of 1996. Maritime photographer Thad Koza tracked down the tall ships in Denmark, France and Italy , where the land-bound could revel in thi s renaissance of ships under sail. Throughout the summer, the world &#39;s sail-training fleet gathered for maritime festival s and the Cutty Sark Tall Ships Races. The season opened in May with the International Festival of the Sea in Bristol , England. From there, ships and aficionados proceeded to other fe stival s in Britain and on the Continent, ending up in Brest, France, in July . The Cutty Sark Races took participants from Rostock , Germany, to St. Petersburg , Russ ia, and Turku , Finland, to Copenhagen, Denmark, in the Baltic and from Genoa, Italy , to Palma de Mallorca and Naples, Italy , in the Med. In North America, the year2000 will bring us another such gathering of the world &#39; s tall ships. Operation Sail , Inc. , which organized the tall ship gatherings in New York in 1964, 1976, 1986 and 1992, has announced the official ports for its

Ireland&#39;s doughty, wooden-hulled brigantine Asgard II, veteran of much stormy Atlantic sailing, came in first among Class A II vessels in the race to St . Petersburg, and second in the race to Copenhagen. Mexico&#39; s Cuauhtemoc dresses ship with all the bunting in the fla g locker,filling the sky with f estive color. Baltic Sea winds blew out the mainsail of the Shabab Oman from the faraway Indian Ocean . It&#39;s all in the day&#39; s work f or the youthful crew to bend on a replacement.