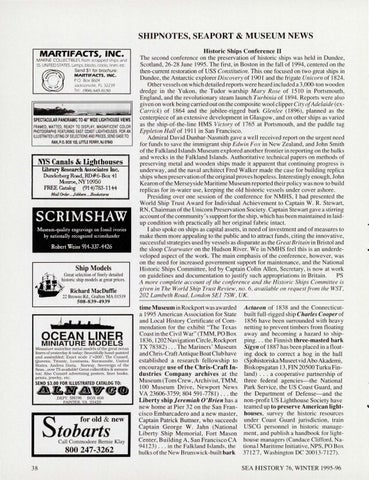 SEND $3.00 FOR ILLUSTRATED CATALOG TO:

Historic Ships Conference II The second conference on the preservation of historic ships was held in Dundee, Scotland, 26-28 June 1995. The first, in Boston in the fall of 1994, centered on the then-current restoration of USS Constitution. This one focused on two great ships in Dundee, the Antarctic explorer Discovery of 1901 and the frigate Unicorn of 1824. Other vessels on which detailed reports were heard included a 3,000-ton wooden dredge in the Yukon, the Tudor warship Mary Rose of 1510 in Portsmouth , England, and the revolutionary steam launch Turbinia of 1894. Reports were also given on work being carried out on the composite wool clipper City ofAdelaide (exCarrick) of 1864 and the jubilee-rigged bark Glen lee ( 1896), planned as the centerpiece of an extensive development in Glasgow , and on other ships as varied as the ship-of-the-line HMS Victory of 1765 at Portsmouth, and the paddle tug Eppleton Hall of 1911 in San Francisco. Admiral David Dunbar-Nasmith gave a well received report on the urgent need for funds to save the immigrant ship Edwin Fox in New Zealand, and John Smith of the Falkland Islands Museum explored another frontier in reporting on the hulks and wrecks in the Falkland Islands. Authoritative technical papers on methods of preservi ng metal and wooden ships made it apparent that continuing progress is underway, and the naval architect Fred Walker made the case for building replica ships when preservation of the original proves hopeless. Interestingly enough , John Kearon of the Merseyside Maritime Museum reported their pol icy was now to build replicas for in -water use, keeping the old historic vessels under cover ashore. Presiding over one session of the conference for NMHS, I had presented the World Ship Trust Award for Individual Achievement to Captain W. R. Stewart, RN, Chainnan of the Unicom Preservation Society. Captain Stewart gave a stirring account of the community&#39;s support for the ship, which has been maintained in laidup condition with practically all her original fabric intact. I also spoke on ships as capital assets, in need of investment and of measures to make them more appealing to the public and to attract fund s, citing the innovative, successful strategies used by vessels as disparate as the Great Britain in Bristol and the sloop Clearwater on the Hudson River. We in NMHS feel this is an underdeveloped aspect of the work. The main emphasis of the conference, however, was on the need for increased government support for maintenance, and the National Historic Ships Committee, led by Captain Colin Allen , Secretary, is now at work PS on guidelines and documentation to justify such appropriations in Britain. A more complete account of the conference and the Historic Ships Committee is given in The World Ship Trust Review, no . 6, available on request from the WST, 202 Lambeth Road, London SEJ 7SW, UK. time Museum in Rockport was awarded Actaeon of 1838 and the Connecticuta 1995 American Association for State built full-ri gged ship Charles Cooper of and Local Hi story Certificate of Com- 1856 have been surrounded with heavy mendation for the exhibit &quot;The Texas netting to prevent timbers from floating Coast in the Civil War&quot; (TMM, PO Box away and becoming a hazard to ship1836, 1202 Navigation Circle, Rockport ping .. . the Finnish three-masted bark TX 78382) .. . The Mariners&#39; Museum Sigyn of 1887 has been placed in a floatand Chris-Craft Antique Boat Club have ing dock to correct a hog in the hull established a research fellowship to (Sjohistoriska Museet vid Abo Akademi, encourage use of the Chris-Craft In- Biskopsgatan 13, FIN 20500 Turku Findustries Company archives at the land) ... a cooperative partnership of Museum (Tom Crew, Archivist, TMM, three federal agencies-the National 100 Museum Drive, Newport News Park Service, the US Coast Guard, and VA 23606-3759; 804 591-7781) ... the the Department of Defense-and the Liberty ship Jeremiah O&#39;Brien has a non-profit US Lighthouse Society have new home at Pier 32 on the San Fran- teamed up to preserve American lightcisco Embarcadero and a new master, houses, survey the historic resources Captain Patrick Buttner, who succeeds under Coast Guard jurisdiction, train Captain George W . Jahn (National USCG personnel in historic manageLiberty Ship Memorial, Fort Mason ment, and publish a handbook for lightCenter, Building A, San Francisco CA hou se managers (Candace Clifford, Na94123) . .. in the Falkland Islands, the tiona.I Maritime Initiative, NPS , PO Box hulks of the New Brunswick-built bark 37 127, Washington DC 20013-7127). SEA HISTORY 76, WINTER 1995-96