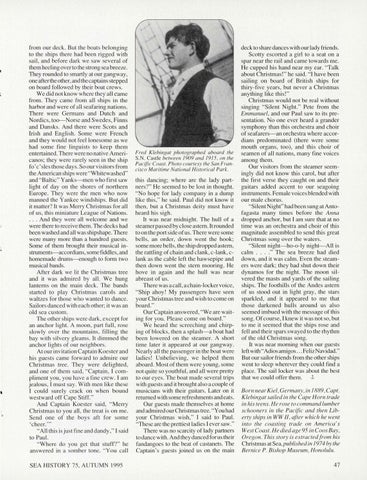 from our deck. But the boats belonging to the ships there had been rigged with sail, and before dark we saw several of them heeling over to the strong sea breeze. They rounded to smartly at our gangway, one after the other, and the captains stepped on board followed by their boat crews. We did not know where they all came from . They came from all ships in the harbor and were of all seafaring nations. There were Gennans and Dutch and Nordics, too-Norse and Swedes, Finns and Dansks. And there were Scots and Irish and English. Some were French and they would not feel lonesome as we had some fine linguists to keep them entertained. There were no native Americanos; they were rarely seen in the ship fo'c'sles those days. So our visitors from the American ships were "Whitewashed" and "Baltic" Yanks-men who first saw light of day on the shores of northern Europe. They were the men who now manned the Yankee windships. But did it matter? It was Merry Christmas for all of us , this miniature League of Nations. ... And they were all welcome and we were there to receive them. The decks had been washed and all was shipshape. There were many more than a hundred guests. Some of them brought their musical instruments-accordians, some fiddles, and homemade drums---enough to fonn two musical bands. After dark we lit the Christmas tree and it was admired by all. We hung lanterns on the main deck. The bands started to play Christmas carols and waltzes for those who wanted to dance. Sailors danced with each other; it was an old sea custom. The other ships were dark , except for an anchor li ght. A moon, part full, rose slowly over the mountains, filling the bay with silvery gleams. It dimmed the anchor lights of o ur neighbors. A tour invitation Captain Koester and hi s guests came forward to admire our Christmas tree. They were delighted, and one of them said, "Captain , I compliment you , you have a fine crew. I am jealous, I must say. With men like these I could surely crack on when bound westward off Cape Stiff." And Captain Koester said, " Merry Christmas to you all, the treat is on me. Send one of the boys aft for some 'cheer.'" "All this is just fine and dandy," I said to Paul. "Where do you get that stuff?" he answered in a somber tone . "You call SEA HISTORY 75, AUTUMN 1995

Fred Klebingat photographed aboard the S.N. Castle between 1909 and 1915, on the Pacific Coast. Photo courresy the San Francisco Maritime National Historical Park.

this dancing; where are the lady partners? " He seemed to be lost in thought. "No hope for lady company in a dump like this ," he said. Paul did not know it then , but a Christmas deity must have heard his sigh. It was near midnight. The hull of a steamer passed by close astern. It rounded to on the port side of us. There were some bells , an order, down went the hook; some more bells, the ship dropped astern, the rattling of chain and clank, c-lank, clank as the cable left the hawsepipe and then down went the stem mooring. He hove in again and the hull was near abreast of us. There was a call, a chain-locker voice, "S hip ahoy! My passengers have seen your Christmas tree and wish to come on board." Our Captain answered, "We are waiting for you. Please come on board." We heard the screeching and chirping of blocks, then a splash-a boat had been lowe red on the steamer. A short time later it appeared at our gangway. Nearly all the passenger in the boat were ladies! Unbelieving, we helped them aboard. Most of them were young, some not quite so youthful, and all were pretty to our eyes. The boat made several trips with guests and it brought also a couple of musicians with their guitars. Later on it returned with some refreshments and eats. Our guests made themselves at home and admired our Christmas tree. "You had your Christmas wish," I said to Paul. "These are the prettiest ladies I ever saw." There was no scarcity of lady pa1tners to dance with. And they danced for us their fandangoes to the beat of castanets. The Captain's g uests joined us on the main

deck to share dances with our lady friends. Scotty escorted a girl to a seat on a spar near the rail and came towards me. He cupped his hand near my ear. "Talk about Christmas!" he said. "I have been sailing on board of British ships for thiry-five years, but never a Christmas anything like this! " Christmas would not be real without singing "S ilent Night." Pete from the Emmanuel, and our Paul saw to its presentation. No one ever heard a grander symphony than this orchestra and choir of seafarers-an orchestra where accordians predominated (there were some mouth organs, too) , and this choir of seamen of all nations , many fine voices among them . Our visitors from the steamer seemingly did not know this carol, but after the first verse they caught on and their guitars added accent to our seagoing instruments. Female voices blended with our male chorus. "S ilent Night" had been sung at Antofagasta many times before the Anna dropped anchor, but I am sure that at no time was an orchestra and choir of this magnitude assembled to send this great Christmas song over the waters. "S ilent night- ho-o-ly night-All is calm . . . . " The sea breeze had died down, and it was calm. Even the steamers were dark; they had shut down their dynamos for the night. The moon silvered the masts and yards of the sailing ships. The foothills of the Andes astern of us stood out in light gray, the stars sparkled, and it appeared to me that those darkened hulls around us also seemed imbued with the message of this song. Of course, I knew it was not so, but to me it seemed that the ships rose and fell and their spars swayed to the rhythm of the old Christmas song. It was near morning when our guests left with "Adios amigos ... FelizNavidad." But our sailor friends from the other ships went to sleep wherever they could find a place. The sail locker was about the best that we could offer them. 1Born.near Kiel , Germany, in 1889 , Capt. Klebin.gat sailed in the Cape Horn trade in his teens. He rose to command lumber schooners in. the Pacific and then Liberty ships in WW If, ajier which he went in.to the coasting trade on America' s West Coast. Hediedage 95 in Coos Bay, Oregon. This story is extra cted Ji-om his Christmas at Sea, published in 1974 by the Bernice P. Bishop Museum, Honolulu.