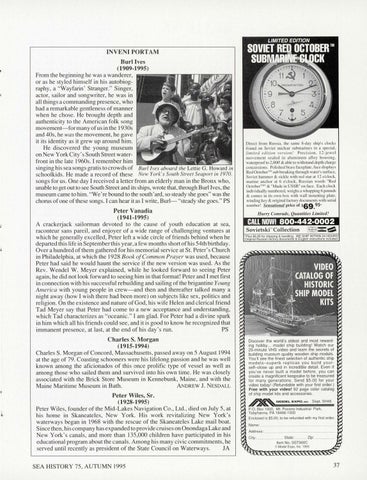 INVENI PORT AM Burl Ives (1909-1995) From the beginning he was a wanderer, or as he styled himself in his autobiography, a "Wayfarin ' Stranger." Singer, actor, sailor and songwriter, he was in all things a commanding presence, who had a remarkable gentleness of manner when he chose. He brought depth and authenticity to the American folk song movement-for many of us in the 1930s and 40s, he was the movement, he gave it its identity as it grew up around him. He discovered the young museum on New York City's South Street waterfront in the late 1960s. I remember him singing his sea songs gratis to crowds of Burl Ives aboard the Lettie G. Howard in schoo lkids. He made a record of these New York ' s South Street Seaport in 1970. songs for us. One day I received a letter from an elderly man in the Bronx who, unable to get out to see South Street and its ships, wrote that, through Burl Ives, the museum came to him. "We're bound to the south'ard, so steady she goes" was the chorus of one of these songs. I can hear it as I write, Burl- "steady she goes." PS

A crackerjack sailorman devoted to the cause of youth education at sea, raconteur sans pareil , and enjoyer of a wide range of challenging ventures at which he generally excelled, Peter left a wide circle of friends behind when he departed this life in September this year, a few months short of his 54th birthday. Over a hundred of them gathered for his memorial service at St. Peter's Church in Philadelphia, at which the 1928 Book of Common Prayer was used, because Peter had said he would haunt the service if the new version was used. As the Rev. Wendel W. Meyer explained, while he looked forward to seeing Peter again, he did not look forward to seeing him in that format! Peter and I met first in connection with his successful rebuilding and sailing of the brigantine Young America with young people in crew-and then and thereafter talked many a night away (how I wish there had been more) on subjects like sex, politics and religion. On the existence and nature of God, his wife Helen and clerical friend Tad Meyer say that Peter had come to a new acceptance and understanding, which Tad characterizes as "oceanic." I am glad. For Peter had a divine spark in him which all his friends could see, and it is good to know he recognized that PS immanent presence, at last, at the end of his day's run.

Charles S. Morgan (1915-1994) Charles S. Morgan of Concord, Massachusetts, passed away on 5 August 1994 at the age of 79. Coasting schooners were his lifelong passion and he was well known among the aficionados of this once prolific type of vessel as well as among those who sailed them and survived into his own time. He was closely associated with the Brick Store Museum in Kennebunk, Maine, and with the ANDREW J. NESDALL Maine Maritime Museum in Bath.

Peter Wiles, Sr. (1928-1995) Peter Wiles , founder of the Mid-Lakes Navigation Co., Ltd. , died on July 5, at his home in Skaneateles, New York. His work revitalizing New York's waterways began in 1968 with the rescue of the Skaneateles Lake mail boat. Since then , his company has expanded to provide cruises on Onondaga Lake and New York 's canals, and more than 135,000 children have participated in his educational program about the canals. Among his many civic commitments, he JA served until recently as president of the State Council on Waterways. SEA HISTORY 75, AUTUMN 1995

Discover the world's oldest and most rewarding hobby ... model sh ip building! Watch our 25-minute VHS video and learn the secrets of building museum quality wooden ship models. You'll see the finest selection of authentic ship models-superb repl icas you bu i ld yourself-close up and in incredible detail. Even if you 've never built a model before , you can create a magnificent keepsake to be treasured for many generations. Send $5.00 for your video today! (Refundable with your first order.) Free w ith you r video! 92 page color catalog of ship model kits and accessories.