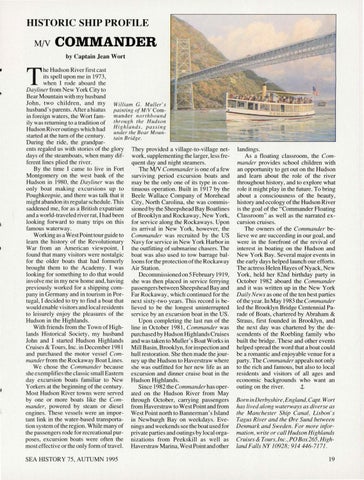 he Hudson River first cast its spell upon me in 1973, when I rode aboard the Dayliner from New York City to Bear Mountain with my husband John, two children, and my William G. Mull er's husband 's parents. After a hiatus painting of MIV Comin foreign waters, the Wort fam- mander northbound ily was returning to a tradition of through th e Hudson Hudson Riveroutings which had Hi g hlands , passing under the Bear Mounstarted at the tum of the century. tain Bridge. During the ride, the grandparents regaled us with stories of the glory They provided a village-to-village netdays of the steamboats, when many dif- work, supplementing the larger, less freferent lines plied the river. quent day and night steamers. By the time I came to live in Fort The MN Commander is one of a few Montgomery on the west bank of the surviving period excursion boats and Hudson in 1980, the Dayliner was the may be the only one of its type in cononly boat making excursions up to tinuous operation. Built in 1917 by the Poughkeepsie, and there was talk that it Beele Wallace Company of Morehead might abandon its regular schedule. This City, North Carolina, she was commissaddened me, for as a British expatriate sioned by the Sheepshead Bay Boatlines and a world-traveled river rat, I had been of Brooklyn and Rockaway, New York, looking forward to many trips on this for service along the Rockaways. Upon famous waterway. its arrival in New York, however, the Working as a West Point tour guide to Commander was recruited by the US learn the history of the Revolutionary Navy for service in New York Harbor in War from an American viewpoint, I the outfitting of submarine chasers. The found that many vi sitors were nostalgic boat was also used to tow barrage balfor the older boats that had formerly loons forthe protection of the Rockaway brought them to the Academy. I was Air Station. looking for something to do that would Decommissioned on 5 February 1919, involve me in my new home and, having she was then placed in service ferrying previously worked for a shipping com- passengers between Sheepshead Bay and pany in Germany and in tourism in Por- Far Rockaway, which continued for the tugal , I decided to try to find a boat that next sixty-two years. This record is bewould enable visitors and local residents lieved to be the longest uninterrupted to leisurely enjoy the pleasures of the service by an excursion boat in the US . Hudson in the Highlands. Upon completing the last run of the With friend s from the Town of High- line in October 1981 , Commander was lands Hi storical Society, my husband purchased by Hudson Highlands Cruises John and I started Hudson Highlands and was taken to Muller's Boat Works in Cruises & Tours, Inc. in December 1981 Mill Basin, Brooklyn, for inspection and and purchased the motor vessel Com- hull restoration. She then made the jourmander from the Rockaway Boat Lines. ney up the Hudson to Haverstraw where We chose the Commander because she was outfitted for her new life as an she exemplifies the classic small Eastern excursion and dinner cruise boat in the day excursion boats familiar to New Hudson Highlands. Yorkers at the beginning of the century. Since 1982 the Commander has operMost Hudson River towns were served ated on the Hudson River from May by one or more boats like the Com- through October, carrying passengers mander, powered by steam or diesel from Haverstraw to West Point and from engines. These vessels were an impor- West Point north to Bannerman 's Island tant link in the water-based transporta- in Newburgh Bay on weekdays. Evetion system of the region. While many of nings and weekends see the boat used for the passengers rode for recreational pur- private parties and outings by local orgaposes, excursion boats were often the nizations from Peekskill as well as most effective or the only form of travel. Haverstraw Marina, WestPoint and other

landi ngs. As a floating classroom, the Commander provides school children with an opportunity to get out on the Hudson and learn about the role of the river throughout history, and to explore what role it might play in the future. To bring about a consciousness of the beauty, history and ecology of the Hudson River is the goal of the "Commander Floating Classroom" as well as the narrated excursion cruises. The owners of the Commander believe we are succeeding in our goal, and were in the forefront of the revival of interest in boating on the Hudson and New York Bay. Several major events in the early days helped launch our efforts. The actress Helen Hayes of Nyack, New York, held her 82nd birthday party in October 1982 aboard the Commander and it was written up in the New York Daily News as one of the ten best parties oftheyear.InMay 1983theCommander led the Brooklyn Bridge Centennial Parade of Boats, chartered by Abraham & Straus, first founded in Brooklyn, and the next day was chartered by the descendents of the Roehling family who built the bridge. These and other events helped spread the word that a boat cou ld be a romantic and enjoyable venue for a party. The Commander appeals not only to the rich and famous, but also to local residents and visitors of all ages and economic backgrounds who want an t. outing on the river.