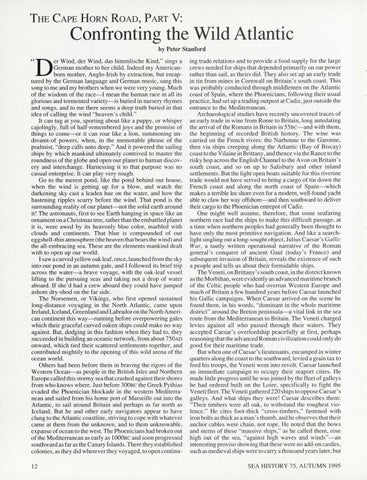 Confronting the Wild Atlantic by Peter Stanford " D e r Wind, der Wind, das himmlische Kind," sings a German mother to her child. Indeed my Americanbom mother, Anglo-Irish by extraction, but enraptured by the German language and German music, sang this song to me and my brothers when we were very young. Much of the wisdom of the race-I mean the human race in all its glorious and tormented variety-is buried in nursery rhymes and songs, and to me there seems a deep truth buried in that idea of calling the wind "heaven's child." It can tug at you, sporting about like a puppy, or whisper cajolingly, full.of half-remembered joys and the promise of things to come--or it can roar like a lion, summoning undreamt-of powers, when, in the memorable phrase of the psalmist, "deep calls unto deep." And it powered the sailing ships by which mankind ultimately contrived to master the roundness of the globe and open our planet to human discov ery and interchange. Harnessing it to that purpose was no casual enterprise. It can play very rough. Go to the merest pond, like the pond behind our house, when the wind is getting up for a blow, and watch the darkening sky cast a leaden hue on the water, and how the hastening ripples scurry before the wind. That pond is the surrounding reality of our planet-not the solid earth around it! The astronauts, first to see Earth hanging in space like an ornament on a Christmas tree, rather than the embattled planet it is, were awed by its heavenly blue color, marbled with clouds and continents. That blue is compounded of our eggshell-thin atmosphere (the heaven that bears the wind) and the all-embracing sea. These are the elements mankind dealt with to open up our world. I saw a curved yellow oak leaf, once, launched from the sky into our pond in an autumn gale, and I followed its brief trip across the water-a brave voyage, with the oak-leaf vessel lifting to the pursuing seas and taking not a drop of water aboard. If she'd had a crew aboard they could have jumped ashore dry-shod on the far side. The Norsemen , or Vikings, who first opened sustained long-distance voyaging in the North Atlantic, came upon Ireland, Iceland, Greenland and Labradoron the North American continent this way-running before overpowering gales which their graceful curved oaken ships could make no way against. But, dodging in this fashion when they had to, they succeeded in building an oceanic network, from about 750AD onward, which tied their scattered settlements together, and contributed mightily to the opening of this wild arena of the ocean world. Others had been before them in braving the rigors of the Western Ocean-as people in the British Isles and Northern Europe called this stormy sea that crashed against their shores from who knows where. Just before 300BC the Greek Pythias evaded the Phoenician blockade in the western Mediterranean and sailed from his home port of Marseille out into the Atlantic, to sail around Britain and perhaps as far north as Iceland. But he and other early navigators appear to have clung to the Atlantic coastline, striv ing to cope with whatever came at them from the unknown, and to them unknowable, expanse of ocean to the west. The Phoenicians had broken out of the Mediterranean as early as 1000BC and soon progressed southward as far as the Canary Islands. There they established colonies, as they did wherever they voyaged, to open continu12

ing trade relations and to provide a food supply for the large crews needed for ships that depended primarily on oar power rather than sail, as theirs did. They also set up an early trade in tin from mines in Cornwall on Britain 's south coast. This was probably conducted through middlemen on the Atlantic coast of Spain, where the Phoenicians, following their usual practice, had set up a trading outpost at Cadiz, just outside the entrance to the Mediterranean. Archaeological studies have recently uncovered traces of an early trade in wine from Rome to Britain, long antedating the arrival of the Romans in Britain in 55BC-and with them, the beginning of recorded British history. The wine was carried on the French rivers: the Narbonne to the Garonne, then via ships creeping along the Atlantic (Bay of Biscay) coast to the Vilaine in Brittany, and thence via the Rance to the risky hop across the English Channel to the Avon on Britain 's south coast, and so on up to Salisbury and other inland settlements. But the light open boats suitable for this riverine trade would not have served to bring a cargo of tin down the French coast and along the north coast of Spain-which makes a terrible lee shore even for a modem, well-found yacht able to claw her way offshore-and then southward to deliver their cargo to the Phoenician entrepot of Cadiz. One might well assume, therefore, that some seafari ng northern race had the ships to make this difficult passage, at a time when northern peoples had generally been thought to have only the most primitive navigation. And like a searchlight singling out a long-sought object, Julius Caesar's Gallic War, a tautly written operational narrative of the Roman general's conquest of ancient Gaul (today's France) and subsequent invasion of Britain, reveals the existence of such a people and tells us about their formidable ships. The Veneti, on Brittany 's south coast, in the district known as theMorbihan, were evidently an advanced maritime branch of the Celtic people who had overrun Western Europe and much of Britain a few hundred years before Caesar launched his Gallic campaigns. When Caesar arrived on the scene he found them, in his words, "dominant in the whole maritime district" around the Breton peninsula-a vital link in the sea route from the Mediterranean to Britain. The Veneti charged levies against all who passed through their waters. They accepted Caesar's overlordship peacefully at first, perhaps reasoning that the advanced Roman civilization could only do good for their maritime trade. But when one of Caesar's lieutenants, encamped in winter quarters along the coast to the southward, levied a grain tax to feed his troops, the Veneti went into revolt. Caesar launched an immediate campaign to occupy their seaport cities. He made little progress until he was joined by the fleet of galleys he had ordered built on the Loire, specifically to fight the Veneti fleet. The Veneti gathered 220 ships to oppose Caesar's galleys. And what ships they were! Caesar describes them: "Their timbers were all oak, to withstand the roughest violence." He cites foot-thick "cross-timbers," fastened with iron bolts as thick as a man' s thumb, and he observes that their anchor cables were chain, not rope. He noted that the bows and stems of these "massive ships," as he called them, rose high out of the sea, "against high waves and winds"-an interesting proviso showing that these were no add-on castles, such as medieval ships were to carry a thousand years later, but SEA HISTORY 75 , AUTUMN 1995